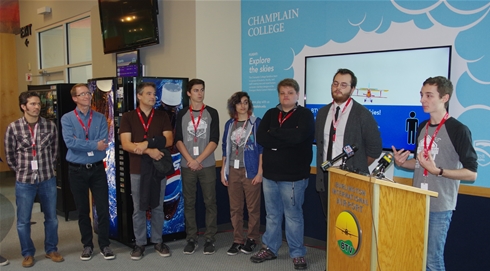 Watch a video about "Flight" and "Graffiniti"'s installation at Burlington International Airport here.

The Champlain College Sandbox team is a group of students, faculty, and staff creating new and novel human-computer interface designs at the Emergent Media Center's MakerLab. The Emergent Media Center employs students to create digital media ranging from mobile apps, serious games and video marketing, to large screen interactives and virtual reality for businesses, non-profits, and government agencies. The MakerLab, located within the EMC, is a physical prototyping lab with a host of devices from high-tech 3D printers to low tech hand tools, where students express their creativity by bridging physical and digital elements.

"Graffiniti" and "Flight" are brought to you by Champlain College, which was named #1  "Most Innovative School" by U.S. News & World Report's "America's Best Colleges" 2016 ranking of regional colleges in the North. 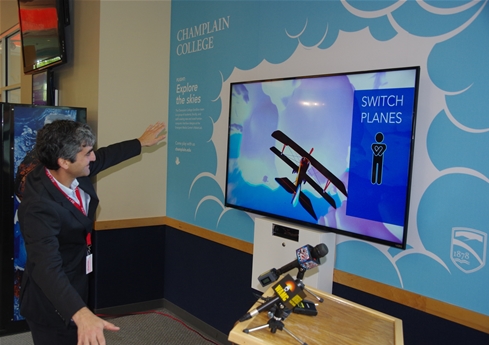 FLIGHT
The Champlain College Emergent Media Center Sandbox Team designed "Flight" (2016) to give the user a dreamlike experience of flying. Simply raise your arms to form wings and you will become the pilot of one of several flying machines. Follow the animated instructions to switch vehicles. Various flying objects will present themselves in the environment allowing you to interact with them. Tools: Adapted Microsoft Xbox 360 Kinect, your hands, feet and body
In the North Terminal, where "Flight" is located, approximately 395,000 passengers passed through the space last year.
Development Team, "Flight": 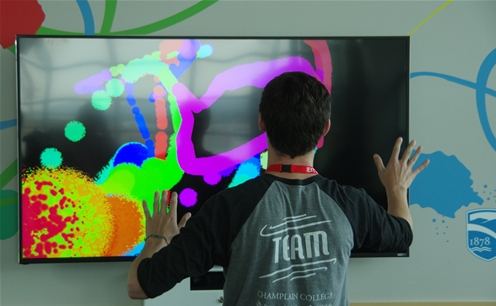 The Champlain College Emergent Media Center Sandbox Team designed "Graffiniti" (2015) to sense a user's hands as a means for painting on a digital canvas. Stand about five feet back from the screen and raise your hands up by your shoulders to engage the device. The right hand controls the movement and size of the paintbrush while the left hand changes color. Full body movement allows you to "spray paint" your dance moves across a virtual wall. The result: a masterpiece within a masterpiece. Tools: Adapted Microsoft Xbox 360 Kinect, your hands, feet and body
In the South Terminal, where "Graffiniti" is located, approximately 258,000 passengers passed through the space last year.
Development Team, "Graffiniti":