Champlain College's Emergent Media Center (EMC) will showcase the combination of virtual reality (VR)  that blends what you are seeing with environmental smells at the 25th Annual South End Art Hop on Friday, Sept. 8 on Pine Street.

The Olfactory VR Project is an experiment with using smell in virtual reality that the EMC has been working on for the past six months in collaboration with two local Burlington businesses - Alice & the Magician, an innovative Flavor & Fragrance company and Matt & Erik Design, a multidisciplinary industrial design and design development company. They have also worked in conjunction with David Stiller, a local businessman and 2012 graduate of Champlain's MFA in Emergent Media program.

The student creators of the experience, dubbed "Eden," say their new system of introducing environmental scents is not a game, but rather a full-sensory environment to explore.  "In our Olfactory VR experience, players begin in a rainy alleyway and make their way forward to a door that leads into a sleek cocktail bar. Inside the bar, players are able to interact with objects and discover different scents," explained lead interactive designer, student Steven Margolin ('18 Game Design).

Users will encounter a virtual bar where plants and empty glasses abound, but there is no human presence other than leftover cigars, lipstick containers, jackets, and purses. What happened here? It's the player's job to explore and find out, Margolin explained. "A video trailer of what the VR experience looks like can be seen at  http://bit.ly/EMCEden, to experience the full effect, you will need to visit the EMC's booth at Art Hop on Friday night, adjacent to ArtsRiot and the SEABA offices and gallery on Pine Street," Margolin said.

The importance of this next-step in the virtual reality world is highlighted by some scientific facts about the sense of smell:

The Eden VR Olfactory project is on the cutting edge of the integration of visuals and scent in technology. The project made its debut in late August at Bookstock in Woodstock and will also be featured at the upcoming Burlington Book Festival and Burlington Innovation Week this fall. 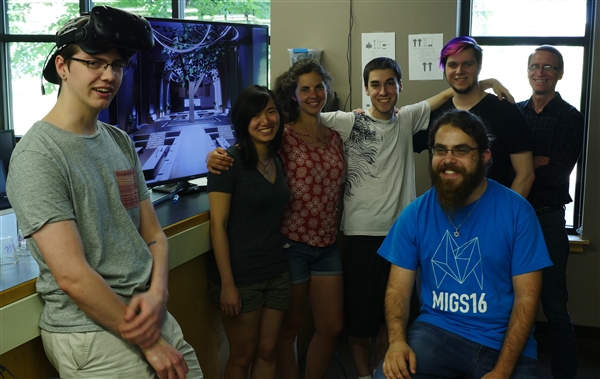