Champlain Abroad courses are designed to connect our students to new places, people and culture. Those connections happen through a range extracurricular and co-curricular events and activities. Two weekend trips are part of the optional extracurricular activities, one to the West Coast of Ireland and one to Northern Ireland. Our local faculty and guest speakers bring their cultural perspective and professional expertise to the course content challenging students to understand material through a new global lens. Many of our courses have an embedded experiential component that takes the students outside the classroom connecting the place and culture to the course content.  Half of Fridays are 'Immersion Fridays,' where Champlain Abroad Dublin provides an opportunity for students to further immerse in culture, academics, and the legendary 'craic.'  The remaining Fridays are your own, giving you the chance to plan independent travel excursions.

The following is a partial list of some of the co-curricular activities that have been offered in conjunction with some of the Dublin courses.  The trips are required if you are in the class, but we usually have extra space for students who want to attend but are not in that particular class.

Irish Culture Through the Fine Arts

This course is designed to introduce students to Irish culture through an exploration of Irish fine arts. Much of the course includes beyond the classroom explorations of The Museum of Modern Art, home to the leading collections and presentations of modern and contemporary art, and The National Gallery which houses the national collection of Irish and European fine art. Explorations of art to be found in Dublin also include visits to local galleries and printmaking studios, and walking tours taking in local architecture and sculptures.

Students taking the Irish Literature courses immerse themselves in the lives of Dublin's literary celebrities from the past three hundred years as they examine their books, letters, portraits and personal items in the Dublin Writer's Museum and the James Joyce Centre. Guided walks through the city reinforce the vision of the local writers, and a visit to Newman House, the original home of University College Dublin, shows the students about life in Georgian Dublin.  A behind-the-scenes tour of the Abbey Theatre has also been a big hit with the students. No visit to Dublin can be complete without discussing Joyce's Ulysses in Davy Byrne's Pub, where sections of the epic are set!

The history courses in Dublin range from pre-Christian and early Christian, to Modern Irish Social History to an interdisciplinary study of Northern Ireland's history. Students in the Modern Social Irish History course have had a behind-the-scenes tour of the Dail Eireann (Irish Parliament), the Ministry of Foreign Affairs, explore the heart of Irish sporting life for over hundred years, Croke Park, and tour Kilmainham Gaol the largest unoccupied gaols in Europe, covering some of the most heroic and tragic events in Ireland's emergence as a modern nation from 1780s to the 1920s. Guest speakers in the past have included Barry Desmond, former Irish Minister for Health and Social Welfare and member of European Parliament.

The Early Irish History course takes students into the pre-Christian Ireland at the Ancient Temple of Newgrange and the Hill of Tara (constructed over 5,000 years ago), the Loughcrew Cairns (a group of Neolithic passage tombs dating to 3000 BC), the monastic city in Glendalough and the National Museum of Archaeology the national repository for all archaeological objects found in Ireland and home to over two million artifacts. The two weekend trips also take in a series of sites very relevant to the history courses.

Students taking the Northern Ireland History course are introduced to the history of army barracks in Ireland, aspects of military life in the past, and the history and architectural heritage of Collins Barracks. They also have the benefit of the weekend trip to Northern Ireland that where they experience firsthand Belfast and its more recent, turbulent history, as well as see its rapid growth and development during the Belfast Black Taxi Tour.

Students taking the Culture and Design course visit the Chester Beatty Library, an art museum and library which houses an extensive collection of manuscripts, miniature paintings, prints, drawings, rare books and some decorative arts. Students examine the exquisite 9th Century illuminated gospel manuscript the Book of Kells at Trinity College. The National Print Museum allows our students to can see how books were composed entirely by hand for centuries, how mechanical typesetting machines such as the Linotype and Intertype were operated in the newspaper industry and how historical hand presses such as the Columbian and the Albion made the wooden presses of Gutenberg's time redundant.

This lab science allows the students to explore global environment issues using several locations unique to Ireland. Student trips in the past have explored peat bogs in central Ireland, coastal processes in North County Dublin, and of course the fascinating, natural underworld of rivers, waterfalls, winding passages and lofty chambers of the Marble Arch Caves in Northern Ireland. Students also visit the Trinity College Geological Museum which provides the students with an opportunity to examine paleontological collections dating from 1777. While on their Northern Ireland weekend trip students explore the world famous Giant's Causeway and the fascinating karstic landscape of The Burren on the west coast trip.

Business students have an opportunity to experience business from the Irish and European Union perspective by taking the Special Topics in Business course, Ireland, the Celtic Tiger, and the European Union and/or the Non-Profit Social Marketing course.

Students in the Ireland, the Celtic Tiger, and the European Union course will really get to see some of the political, cultural, and social issues surrounding the rise and fall of the Celtic Tiger through a combination of classroom lectures, guest lecturers, and field trips. In the past, students have visited the European Commission and European Parliament offices in Dublin as well as visits to debates taking place throughout the city.

Students taking the Non-Profit Social Marketing course work for clients in the Dublin community. In Spring 2009, one group of students worked with Dublin City Council to come up with ways to get Dubliners cycling more, and they also worked with Barnardo's Children's Charity to help them get their fundraising message out to university students through various social networking venues (Twitter, Facebook etc.). In Fall 2009, the students worked with Dublin City Council for an anti-littering campaign and developed a campaign to change people's attitudes towards voting. 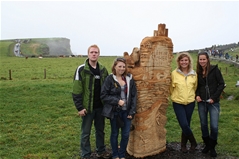 The West Coast of Ireland is the stuff of postcards. Small villages, breathtaking views, horses in the green fields — you know, the Ireland of the movies.

Students leave Dublin early morning on Friday and head to the dramatic scenery of The Burren. This area is home to some great ruins and megalithic tombs that we'll explore. After lunch we'll visit the world famous Cliffs of Moher, before stopping for the night in Doolin, a small fishing village in County Clare. The group overnights at one of the local hostels, has a great pub meal, and spends the evening listening to a traditional Irish music session. Doolin is well known as a centre for traditional music.

On Saturday morning we'll (weather permitting) take a trip to Inis Mor, one of the Aran Islands several miles off the coast near Doolin. There's lots to do on the islands, including hiking, renting a bicycle, and visiting the lighthouse and historic sites.

Once we're back from Inis Mor, we'll drive in a coach to Galway where we'll spend the night. Galway is one of the largest towns on the historic west coast of Ireland, with a reputation for being an entertainment hotspot, filled with an amazing atmosphere, festive crowds, cobble-stoned streets, and a large student population. Galway is located on the edge of the Gaeltacht (Irish speaking area) and is the gateway to magnificent areas such as Connemara, Corrib Country, and the Aran Islands. Like most Irish cities, Galway fared well with the Celtic economic tiger. The city is a continuing centre of growth with its university, Institute of Technology, theaters, cathedral, castle, hotels, docks, industries and other interesting attractions.

On Sunday morning students will take a short visit into the mountainous region of Connemara before heading back to Dublin in the afternoon. 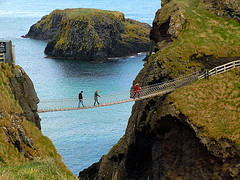 One sixth of the island of Ireland actually doesn't belong to the Republic of Ireland. Instead, Northern Ireland is a constituent country of the United Kingdom, and is (somewhat) ruled from London. You may have heard of the violent campaigns between Catholic and Protestant, nationalist and unionist, IRA and RUC, during a time collectively known as 'The Troubles.' Although the Troubles are only recently over, Belfast is now calm and is experiencing a regeneration.

Students leave Dublin early Saturday morning and drive north to Belfast, where they have a fascinating tour of some of the areas hardest hit by political and religious strife during the troubles. We'll then visit the fantastic new Titanic Experience before travelling onwards to our evening stopover in the beautiful seaside town of Ballintoy. Sunday will be a visit to Carrick a Rede Rope Bridge, Dunluce Castle and the Giant's Causeway, before heading back to Dublin in the late afternoon 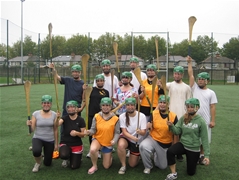 The staff at Champlain Abroad Dublin organize a series of activities designed to immerse all students in the Irish culture and to allow them to really get to know the city and its people. Past events have included trips to hurling matches, Gaelic football, horseback riding in the Wicklow Mountains, hiking trips along the beautiful coast and local mountains, trips to various historic sites not otherwise covered in class (e.g. the mummies of St. Michan's Church, Malahide Castle, Powerscourt Estate and Gardens, and the monastic site at Glendalough).

Our Academic Centre also hosts Irish movie nights and the occasional BBQ. Of course you don't want to only rely on the offerings of the program. There's lots to do in Dublin, so we fully expect you to get out on your own and explore all the city has to offer. Staff will point you in the right direction, but some of the annual events in the city include Dublin Culture Night, Dublin Open House, Oktoberfest, the Fringe Festival, Temple Bar TradFest, Jameson Dublin International Film Festival. And of course, who could forget St. Patrick's Day in the heart of Ireland.

Ireland as the Gateway to Europe

There's plenty of free time to explore Europe during your time in Dublin. Each semester has a full week break as well as several long weekends, and if you plan well enough in advance, getting a flight to a great European destination can be an inexpensive and easy to plan vacation. In the past, students have used their free time to explore places such as Barcelona, Paris, London, Edinburgh, Berlin, Rome, Florence, Munich, Copenhagen, Amsterdam, and many other fantastically cultural destinations throughout Europe and beyond. There is a lot more to see of Ireland outside of Dublin. The staff at Champlain Abroad Dublin can help with advice on places to go and how to get there!