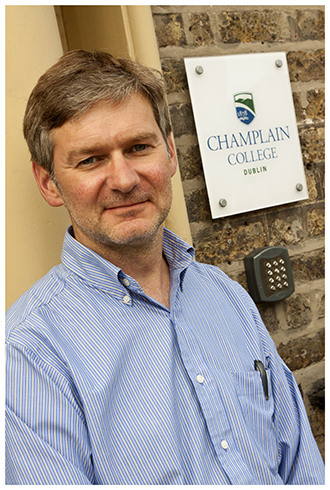 Dr. Stephen Robinson is a British-born, Canadian-trained geographer and geologist with degrees from the University of Waterloo, Queen's University, and a PhD. from McGill University in Montreal.  Dr. Robinson taught at St. Lawrence University in Canton, NY, from 2001-2008, where he was the Chapin Associate Professor of Geology, specializing in Quaternary geology (dirt, ice, and peat), hydrology, and climatology.  He has led student groups on academic trips to study environmental issues in China, glaciers in Alaska, wetlands in northern Canada, and cultural history in England.  He was the director of St. Lawrence's London program in 2007-08, and has been with Champlain College Dublin as director of the Dublin campus since August 2008.

He believes that all students should take advantage of studying abroad to expand their horizons, experience immersion in a different culture and academic setting, understand a bit more about the world around them, and meet new people.  His interests include traveling, hockey, auto racing, and reading non-fiction books on history, travel, and culture.  He lives in Greystones, County Wicklow, Ireland with wife Catherine, young son Greyson, and their two adorable dachshunds, Adder and Neely.