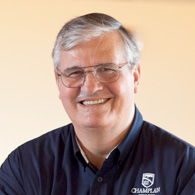 I just want to take a moment to introduce myself and give you a brief overview of my professional background. I've been with Champlain College for more than 40 years. I started out as a programmer in 1970 (using giant computers and punched cards of course). In the mid 70s I became the Director of IT...a position which I held until 1997. In this role I had an opportunity to participate on a day to day basis with and witness the growth of computing from its infancy to what became an integral part of the operation of every organization. It was an experience that I was very fortunate to be a part of.

In 1993 I started the Champlain Online program using racks of modems and a bulletin board system produced by a company called Galacticomm! The Web was still in its very earliest stages and was far too unreliable to even consider using for online education. Believe me when I say we've come a long way since then. I managed the online program until just a couple of years ago. I was also the Division Chair of the Computer Systems division for a total of about 15 years. Throughout my tenure here at the College I have taught on a part time basis...starting with courses like Programming in Fortran and Cobol...that's a long time ago!

My current status is that of full-tme instructor in the Division of Champlain College Online.