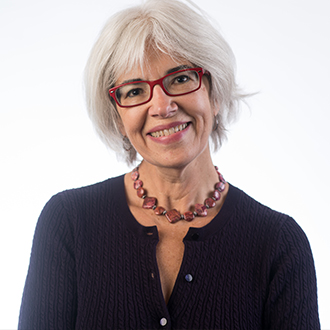 Joanne Farrell will be on Sabbatical leave for the academic spring semester of 2020.

Joanne Farrell received her doctorate specializing in dramatic literature and rhetoric at McGill University. A Professor at Champlain College, she established the Writing Lab and developed a new major, the Professional Writing Program.

As Artistic Director of Champlain Theatre, she invited new artists in the community to present their works, created the Shorts Works Festival and Champlain Theatre for Social Change, and also directed over 13 plays since 2003, including All My Sons, The Cripple of Inishmaan, How I Learned to Drive, and No Exit.

Dr. Farrell developed the Master Course for Rhetoric, the undergraduate writing requirement. In addition to teaching Rhetoric and Human Rights, she publishes articles in rhetoric and writes short plays, including a staged reading of The Kite Runner for the Community Book Program.

Working with students in the Fimmaking major, Dr. Farrell produced and directed a short film, "One Night," which premiered and consequently sold at the LAFF film festival.

My tattoo is, literally, a part of me. While the shamrock symbolizes my cultural heritage, each leaf represents one of the four interrelated domains that make up my life: family, friends, place, work.