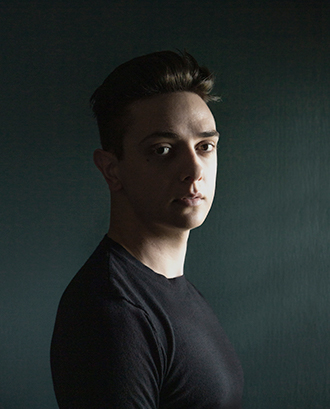 Jonathan Mikulak is an educator and practicing artist. He is currently an Assistant Professor of Visual Communication Design and maintains an independent design consultancy.

In 2011, Jonathan moved from Chicago to Vermont, where he accepted the position of Senior Designer for the Champlain College Marketing Department. Jonathan became a member of the adjunct faculty at Champlain in the Graphic Design & Digital Media program in 2014, and was hired as a full-time Assistant Professor of Visual Communication Design in 2019.

In 2015, Jonathan advised a team of graphic design students in the development of Weathervane, a biannual magazine for the Champlain Division of Communication & Creative Media.

During the 2018-19 academic term, Jonathan served on the Academic & Professional Purpose Team at Champlain with a goal of developing initiatives to support postgraduate student success and create additional hands-on learning opportunities for undergraduates. Additionally, Jonathan collaborated with Terrence Sehr—a Faculty Advisor from Champlain College's Emergent Media Center and MakerLab—to produce "Folly," an audiovisual installation in which the artists transformed the Champlain College Art Gallery into a responsive sensory experience bathing visitors in waves of multicolored, undulating light and abstract sound that responded to their movements.

Currently, Jonathan serves as Education Chair on the Board of Directors for The American Institute of Graphic Arts (AIGA) Vermont chapter, where he launched the first AIGA Vermont Design Mentorship Program. Jonathan has been a participating member of AIGA since 2007.

Jonathan received his MFA in Emergent Media from Champlain College in 2016 and his BFA in Visual Communication from the Illinois Institute of Art: Chicago in 2007.

When not designing or teaching, Jonathan can be found practicing Ikebana in his home near Lake Champlain, exploring museums with his husband, or buying black clothing to add to his collection.