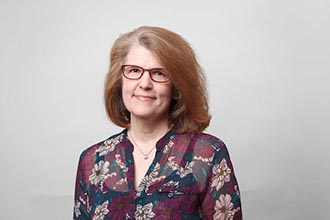 A native of the Midwest, Kristin Novotny calls upon two decades of teaching experience in her work as a full-time Core Division faculty member.  After finishing her doctoral studies at the University of Wisconsin-Madison, Kristin was lured to Vermont by a tenure track position at Saint Michael's College.  She taught Plato's Republic and Rousseau's Social Contract (among other classics of political theory) to several thousand students during her 16 years there.  Along the way she earned tenure, chaired the Political Science Department, was elected to the college's tenure and promotion committee, and published on issues of exclusion and autonomy.

Kristin acquired a new skill set in 2007 when she earned a Masters in mediation and applied conflict studies at Woodbury College (now the Woodbury Institute at Champlain College).  After leaving Saint Mike's to pursue full-time work in the field of conflict resolution, she spent several years as a professional mediator and facilitator in Vermont community justice organizations.  Kristin is trained to help people have difficult conversations and has facilitated hundreds of face-to-face meetings between community reparative boards, low-risk criminal offenders and their victims, and other persons in conflict.

Kristin began teaching at Champlain College in 2012.  She is an aficionado of movies, theatre, books, chocolate, cat videos and the Green Bay Packers.

The mediator Kenneth Cloke writes that "Transformation and learning require awareness and listening." This picture, which hangs on my office wall, reminds me that listening is the bedrock of everything I do as a mother, daughter, friend, teacher, and citizen.

"The Core Division teaches students to make connections between ideas, to think and express themselves cogently.  What could be more important to a successful career?"