Ready to get started?   Apply now!

Are you passionate about telling stories visually? Democratized production and distribution methods, along with the convergence of global media networks, mean there have never been more opportunities to find an audience for quality filmmaking.

Champlain's Bachelor of Fine Arts (BFA) in Filmmaking is specifically tailored to help you develop your creative and technical skills. With excellent instruction, access to the latest technology, and a hands-on approach to learning, you'll graduate with an impressive résumé and portfolio.

Why Study Filmmaking at Champlain?

Through our Upside-Down Curriculum, you'll take relevant courses in your major—including Audio Production, Screenwriting, and Introduction to Filmmaking—in your first year. As you explore different types of work on and off set, you will gain exposure to a variety of filmmaking styles. This early experience allows you more time to build your portfolio and make informed decisions about your own interests; based on your career goals, you'll choose a concentration to focus your filmmaking education. Choose between Cinematography, Directing, Motion Graphics, Producing, Screenwriting, and Sonic Arts.

While trying on roles such as director, cinematographer, sound designer, and editor, you'll also learn the vital business aspects of a film production. Immerse yourself in film history, aesthetics, and criticism, while building experience with budgets, promotion, and the technologies of film.

Our Filmmaking program's remarkable combination of conceptual engagement, technical skills, artistic experimentation, and business training will help you polish your own signature style and prepare you for a variety of creative opportunities in the industry.

The 2021 Fiske Guide to Colleges selected Champlain as one of the "best and most interesting schools" in the United States, Canada, and Great Britain.

Champlain was named a "Most Innovative School" by U.S. News & World Report (for the seventh consecutive year!) in its "America's Best Colleges" 2022 rankings.

SAMPLE COURSES IN THE FILMMAKING CURRICULUM 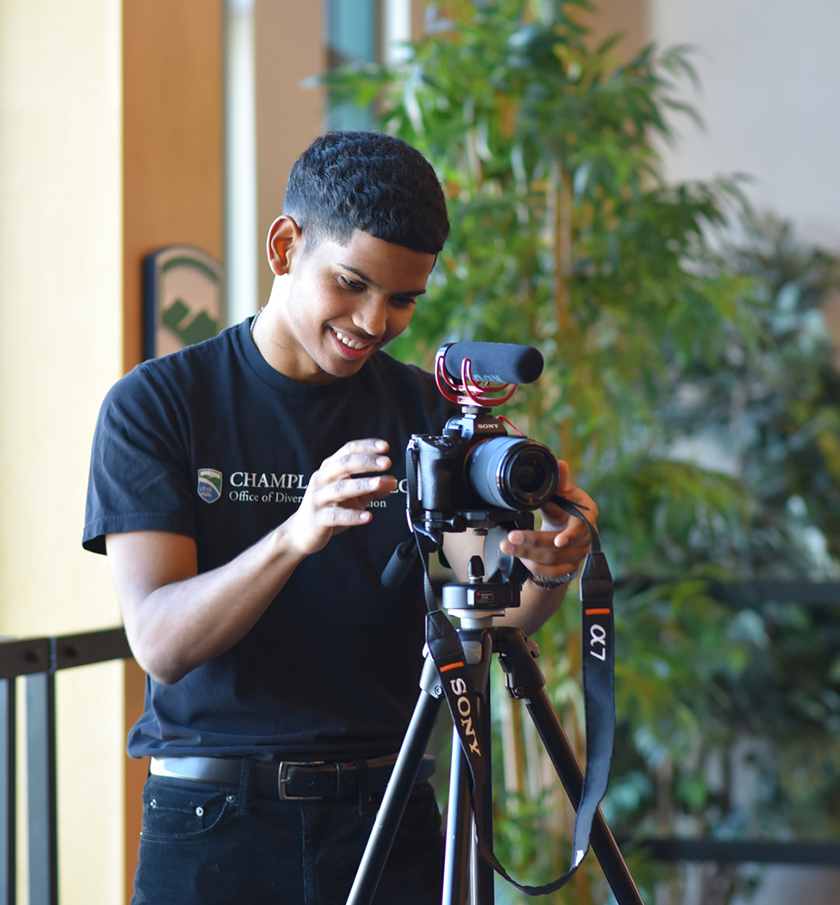 Directing & Acting for the Screen

I chose the arts as my field because of my passion and drive to create. I didn't know I wanted to major in Filmmaking until I was told by an Admissions Counselor to focus on my day-to-day activities, that my calling was in there somewhere. I noticed that I'd already been watching and studying films way before I was remotely interested in going to school in that field.

What has been your experience with the Filmmaking program?

I truly love the Upside-Down Curriculum—it gave me the opportunity to feed the beast that has been my artistic ambition since my first semester. The professors are a valuable and important part of my experience because they are all working professionals with an abundance of knowledge about how our industry is run.

I also value the connections I built with my peers. Because of the need for collaboration in filmmaking, we were all working on each other's projects and bouncing new and fun ideas off of each other. The element of competition is removed from the curriculum, which is great because it allows us to help one another grow.

How has Champlain prepared you for the professional world?

Champlain has taught me the patience, techniques, and networking skills that are essential to jump-starting my career. I've had opportunities to work on student films, indie films, and even industry commercial work. This experience paired with my degree will definitely give me a leg up over other candidates for similar positions. The Career Collaborative is also a great aid to students, especially those who want to get started early.

I was particularly drawn to Champlain's small size. It's perfect because you get to know the people you're going to class with, and you become close with your professors and mentors. Those relationships allow you to learn as much as possible from the most inspiring people.

Which was your favorite class at Champlain?

My favorite class was my first documentary class because that's where I found out about the type of work I want to pursue. I also got to work on my own for the first time, which was challenging but rewarding. My project ended up receiving an honorable mention at the Northeast Student Emmys. It made me realize the impact I can have on people by telling their stories to the world.

Are you involved in any extracurricular activities or clubs?

I'm involved in the Women in Film Club and the annual service trip to Uganda. Women in Film is a great space that inspires women and nonbinary students in a male-dominated field of study. We inspire each other to create change and make the future more inclusive for all people in the industry.

I have also helped with the Uganda Service Trip for three years. It's a great way for students to learn intercultural intelligence while creating meaningful change and fulfilling relationships through service learning.

Let us know you’re interested so we can keep in touch! 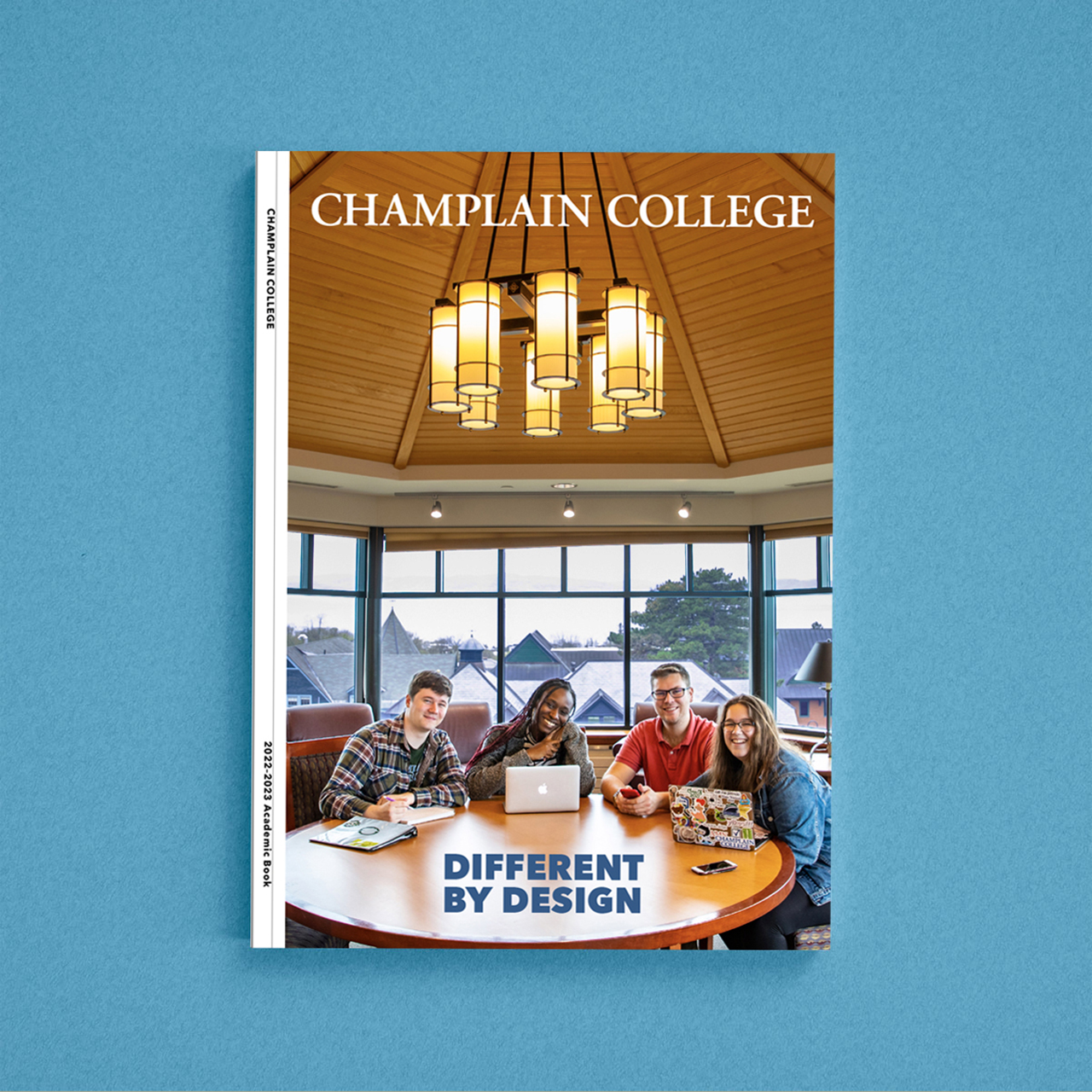 Sign up to download our academic catalog, and receive helpful tips and advice, deadline reminders, and inspiring information about careers, majors, and college life at Champlain. See why we’re ranked one of the most innovative schools in the country.

Latest Filmmaking News from The View

Join our Financial Aid Director for an informative session on financial aid and paying for college on Dec. 7.