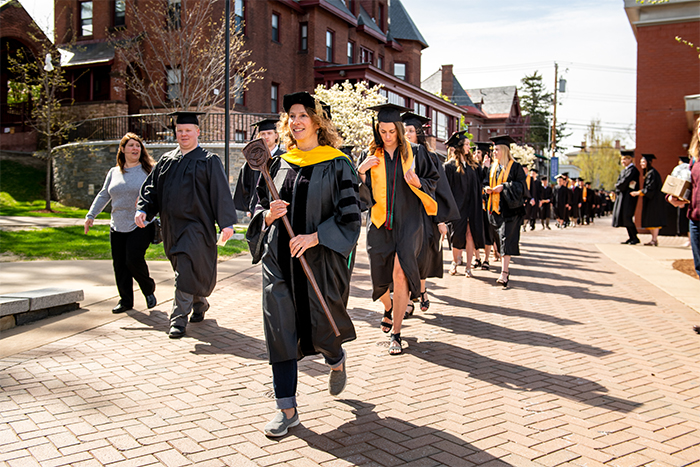 Champlain College began in downtown Burlington in 1878 as Burlington Collegiate Institute, founded by G.W. Thompson. The Institute was renamed Burlington Business College and operated under E. George Evans' direction from 1884 to 1920, when it was purchased by A. Gordon Tittemore. He ran the school until 1956, when C. Bader Brouilette, in partnership with Albert Jensen, acquired the College. Brouilette assumed the role of president, and two years later established the institution as Champlain College, offering associate degree programs to students.

Champlain College purchased Freeman Hall in 1958 and moved from downtown to the Hill Section of Burlington. In 1965, the College opened its first dormitory in a restored Victorian building on historic South Willard Street. In 1970, Champlain built Joyce Learning Center to support its growing student body.

Brouilette remained president until his retirement in 1977, when he was succeeded by Dr. Robert Skiff. During Skiff's presidency, the College acquired several buildings that were converted to residence halls, and constructed the Hauke Family Campus Center in 1989. In 1991, the College introduced its first bachelor's degree program. Today, Champlain offers bachelor's degree programs in 31 fields of study, including information technology, creative media, business and education.

In 1992, Dr. Roger Perry became the sixth president of Champlain and, under his leadership, Champlain established one of the country's first online academic programs. During the '90s, Champlain also offered academic programs at satellite campuses in Israel, the United Arab Emirates, and India. The first master's degree program was launched in 2002. During Dr. Perry's tenure, the campus expanded to include the Robert E. and Holly D. Miller Information Commons (1998), the S.D. Ireland Family Center for Global Business and Technology (2004), and the IDX Student Life Center (2005).

Under the leadership of Dr. David Finney, Champlain's seventh president, the College began expanding its graduate programs. By 2009, the College had established study-abroad campuses in Montreal, Canada, and Dublin, Ireland. The College marked a planning milestone in 2011 when President Finney introduced the Champlain 2020 Strategic Plan. During his nine years as president, the campus expanded to include the Roger H. Perry Welcome & Admissions Center, Miller Center at Lakeside Campus, Center for Communications & Creative Media and five new residence halls.

Looking to the Future

On July 1, 2014, the College welcomed its eighth president, Donald J. Laackman. In his first year, President Laackman provided leadership for the goals set forth in the Strategic Plan, which includes achieving academic excellence; enriching student life and career opportunities; enhancing financial stability; exciting, engaging and empowering faculty and staff; and fostering an inclusive and diverse community. In 2015, President Laackman announced the launch of the Champlain Futures Initiative, an iterative process designed to deepen the College's culture of innovation by combining an understanding of the College's strengths with an awareness of emerging trends and opportunities.

President Laackman also oversaw the expansion of the College's path-breaking truED education partnership to the U.S. Office of Personnel Management and the establishment of the David L. Cooperrider Center for Appreciative Inquiry. Under President Laackman's leadership, the College announced the opening of the Women's and Gender Center and broke ground on Eagles Landing, a new residence hall for upper-class students in downtown Burlington.

Much of the regalia in today's ceremony originated in medieval European universities such as Oxford. Since most of the professors in that age were church clerics, they wore long, heavy, rather austere, robes with hoods. This manner of dress not only reflected their vows of poverty, but also kept them warm in the drafty university halls of the period. As time passed, these hooded robes evolved into elaborate vestments that more closely resembled the colorful, symbolic fashions of the royal courts.

These vestments were often made of colored silks with heavy embroidery. Different styles of hoods (which were by now entirely symbolic and no longer designed to cover the head), mortars (a stylized cap popular at the time), and cassock-like gowns displayed the loyalties, disciplines, and levels of achievement of the wearer.

As early as the 1700s, academic costumes found their way to America at the University of Pennsylvania and Columbia University (then King's College), and at a few other colleges founded in colonial times. Toward the end of the nineteenth century, Gardner Cotrell Leonard, of Albany, New York, undertook the stabilization of the costume's symbolism after his family's firm designed special regalia for Williams College in western Massachusetts.

The American Council on Education has updated the academic costume code three times since then, most recently in 1986. For all colleges and universities that adhere to the Intercollegiate Code, the general descriptions are the same, although certain institutions have made slight modifications when permissible.

The color of the gown is commonly black with no trim for the bachelor's or the master's degree. The doctor's gown is faced down the front with velvet, with three bars of the same across the sleeves, and may be worn open or closed. Rarely, the trim of the doctor's gown can conform to the color code for the edgings of hoods and the tassels of caps. Ordinarily, the velvet is either black or dark blue, since the most common degree title is doctor of philosophy.

The color code is the same for all degrees, although the binding or edging of the hood varies in width: two inches, three inches and five inches for the bachelor's, master's and doctor's degrees, respectively. Similarly, the hoods vary in length. For example, golden-yellow velvet, five inches in width, bound to a black 36-inch hood with panels on each side and lined with satin colors-displays a Ph.D degree in a field of science, with the satin lining indicating the colors of the particular college or university that awarded the degree.

The bachelor's degree has pointed sleeves and the gown hangs closed. The hood is optional, although if worn it should conform strictly to the color and design code. The master's degree is indicated by an oblong sleeve, open at the wrist, with the base hanging and square-cut. The gown may be worn open or closed, according to design; the hood is 30 inches, without side panels, and is bound with three-inch velvet.

Tassels for caps may be black or may conform to the color code, except that gold is most often worn for the doctor's degree. Members of the governing body of a college or university—and they only, whatever degrees they hold—are entitled to wear doctor's gowns, but their hoods may be only those of degrees actually held by the wearers or especially designed by the institution. The chief officer and the chief marshal may wear specifically designed costumes as approved by the institution.

The College Mace was commissioned by the late Edward P. Lyman, Sr., former vice president for Development. It is carried by the College Marshal, who leads the procession at Commencement and at other formal academic occasions.