This new three story office building was built in 2010 and the college occupied it in January 2011.  The building is 39,552 GSF with 36,754 total occupied space and houses the departments of Finance, CPAS, HROD, Advancement on the third floor; CPS, Marketing, CRM and Graduate Studies, and IS on the second floor, and EMC and the new Maker's Lab on the first floor.

The building has a stair tower element and entry on the northeast corner that is a focal element when viewed from this vantage point.  A similar stair tower is repeated on the south elevation of the building at the main building entry.  The south entry and its covered pedestrian plaza are located to provide convenient and safe access from a busy bus drop-off/pick up area and the parking lot and is the main entry to the building.  Included in the design is an open rooftop patio enclosed by railings on the 3rd floor southwest corner of the building that is used as an outdoor space by its occupants.

Construction is happening now on the first floor for the EMC expansion.  Champlain College is expanding its programs in innovation, media, and entrepreneurism into space adjacent to the Emergent Media Center on the first floor of the Miller Center at the Lakeside campus to build the Champlain College MakerLab, and expand graduate studio space in Emergent Media. The expansion will allow the EMC Center of Excellence to house all of its existing and new programs within one open, collaborative space. The majority of the Emergent Media Center's production studio will move into the former CPS space, with staff, faculty, undergrad, and graduate fellow work stations, a conference room and an interactive gallery. The former EMC staff and conference room area will be home to Champlain's MakerLab - a rapid prototyping innovation space that will provide courses for students and have a public collaboration with Burlington's new Generator space. Collaborative space for the graduate program in Emergent Media will be located in the middle of the Center. A late April opening event is scheduled with more details to follow. 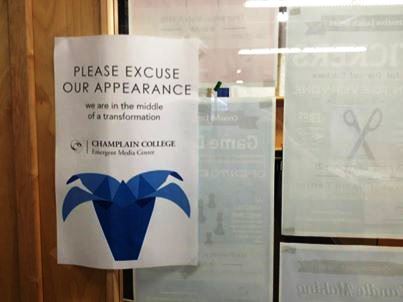