We have 14 beautifully restored Victorian-era mansions that ring the central campus. Once stately homes in the highly sought-after historic Hill Section neighborhood of Burlington, each residence hall maintains the gorgeous woodwork, bay windows and curved staircases of its era as well as other architectural elements from the period.

All Champlain College residence halls have wireless internet and are smoke and substance free. 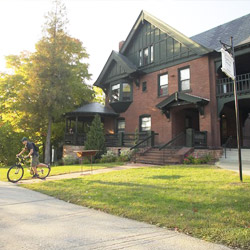 396 Main is a residence hall with a feeling of “home.” Guests enjoy covered porches and relaxing in the living room-style lounge. 396 Main is a former mansion with a lovely entry hall, foyer, large windows and gorgeous woodwork. 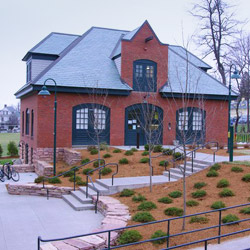 Adirondack House has a small, intimate setting. The building, a former carriage house, was recently renovated. While it now features many modern niceties such as newer furniture and air-conditioning, it still possesses its historic architecture and charm.

Adirondack House is air conditioned and is handicap accessible. 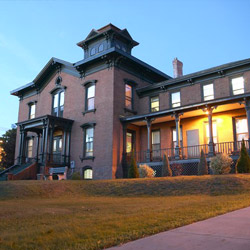 Located at the corner of Maple and South Willard streets in the center of campus, Bader Hall represents the ideal combination of size and convenience at Champlain. This residence is complete with a view of the lake from its west-facing windows. The interior of the building was also newly renovated in the summer of 2012. 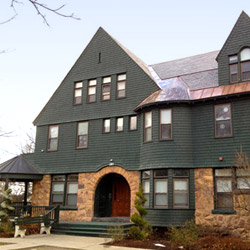 Check out one of Champlain's most unique buildings. The large foyer serves as a lounge and gathering space. 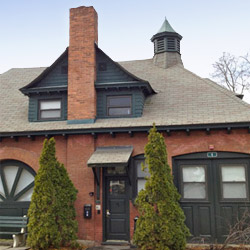 Carriage House is among the smaller residence hall communities at Champlain College: 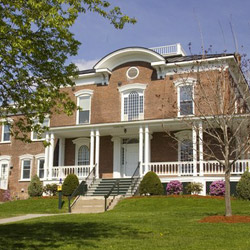 Cushing Hall is located in the center of campus.  From Cushing, it is just a short walk to the IDX Student Life Center, dining hall, fitness center, and academic buildings. Although Cushing may not look like a Victorian era home, it is very popular because of the location and the personal privacy it offers.

The building is air conditioned and handicap accessible. 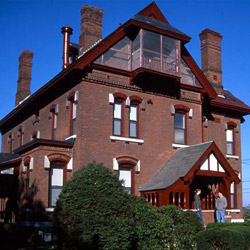 Newly renovated, Hill Hall is another example of the lovely turn-of-the century mansions that are now Champlain College residence halls. This air conditioned building is located on the corner of South Willard and Maple streets in the center of campus. Hill boasts beautiful woodwork and recently renovated bathrooms. 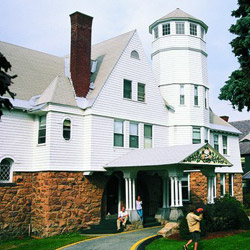 Jensen Hall, rumored to be haunted by a former occupant, is one of our most attractive and certainly one of our most highly sought after residence halls. The two-level "tower room" is one of Champlain’s best known architectural features.

A BRIEF HISTORY OF JENSEN HALL

There are many stories and legends about this house, including a claim that the house is haunted by the ghost of a sea captain who was one of the early owners, and whose wife liked to climb into the tower and watch for his ship to sail into Burlington harbor. There is no evidence that this story, or the resulting ghost, is true. But Jensen is, by far, one of the most beautiful residence halls on campus. 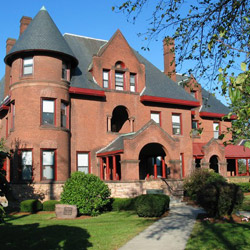 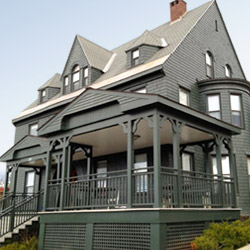 Pearl’s room layout is quite unique, from turret rooms to L-shapes, to corner singles, Pearl has something for everybody. Its brand new front porch is a great place to relax on a nice day. 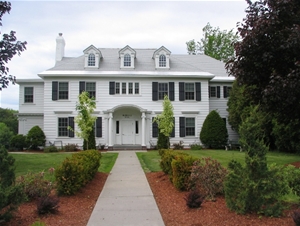 Rowell Hall underwent a wonderful renovation is the summer of 2006. A Greek Revival mansion, Rowell Hall stands out as one of Champlain’s most beautiful and most sought-after residence halls. It offers large bathrooms, a refrigerator, television, and microwave.

The building is air conditioned and is handicap accessible. 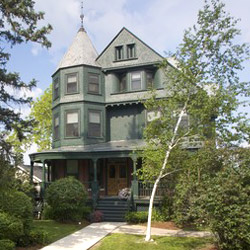 Schillhammer Hall is on the corner of Cedar Lane and Summit Street. Adjacent to the Miller Information Commons, this house marks the southeast corner of Champlain's campus. Some of the rooms offer spectacular views of the beautiful Lake Champlain. Many of the rooms have adjoining bathrooms. 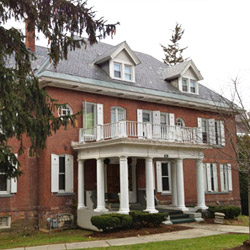 South House is located at the corner of Cliff and South Willard streets in a quieter, more residential part of Burlington’s hill section. 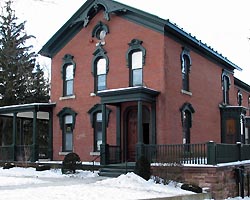 Whiting Hall is located in the heart of the residential campus on the corner of South Willard Street and Maple Street. Whiting is a Victorian-era mansion with beautiful original woodwork and three floors of student rooms. Whiting shares lawn space with McDonald Hall, and has a large front porch.