Endangered Alphabets: The Art of Signage and Betrayal

Six signs depicting endangered alphabets are on semi-permanent display in the Miller Information Commons. They were designed and carved by Champlain College professor Tim Brookes. 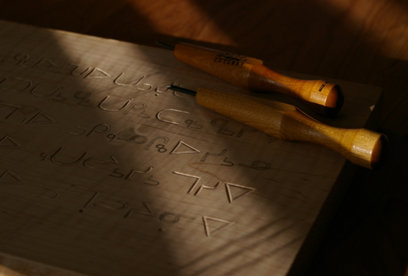 Statement by the artist, Tim Brookes

The Endangered Signage Display consists of six signs hung around the library at strategic and visible points.

The largest, just inside the front door, reads "Welcome." Of the others, which hang on all three floors above the shoulder-height book stacks, one says "book," and others say "wisdom," "writing," "knowledge," and "document," which might be a noun or a verb. At least, that's what the signs say on one side. On the other side, they show a series of symbols or squiggles, different on each sign, that mean nothing to the visitor whatever.

These signs, which I have carved in fine cherry wood and then painted, are the latest extension of my Endangered Alphabets Project. The strange symbols are, in fact, words made up of glyphs (in other words, characters representing letters or syllables) from alphabets that are in danger of vanishing from the world because their languages have abandoned traditional lettering in favor of another alphabet-usually the Latin alphabet, the letters we use to write English. 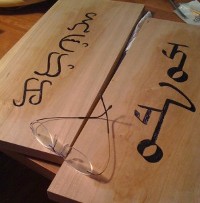 The Endangered Alphabets Project was a way of preserving some of these alphabets as an exhibition and a book-but what is this offshoot of my project doing in a library? And why is it in the form of signs that (on one side, at least) people can't read?

It struck me that by taking the Endangered Alphabets Project out of its context as an exhibition in its own right and hanging pieces of it in a library, we were conspiring to create an entirely different kind of art. You can call it signage art-that is, art made out of signage, or art that comments on signage.

Everything about a library makes these promises; signage does it in the most condensed and quintessential form. A sign saying "Reference," then, not only tells us where the reference desk is, but it is in itself a form of reference.

Signage is especially important in complex times and places, because it offers to make our decisions easy. The greater the amount of information, then, the more important the signage. The library, after all, was the cause of the invention of the Dewey Decimal System, which was one of the great information-analysis-and-retrieval systems, and now dominates the signage of most libraries at the ends of their stacks. Google is the signage of the 21st century.

For a sign to be so deliberately unhelpful feels almost like a betrayal-a betrayal that shows us just how dependent we are on published, printed or displayed information to tell us what things mean, where things are to be found, what to believe.

The more I thought about it, the more I liked the idea of a sign that would actually compel the visitor to ask questions, to wonder "What the heck does that say? What does it mean? What language is that? Why is it there in the first place?" Maybe they'll even start wondering about endangered languages, alphabets and the history and nature of writing. That's really a teacher's job-to help complicate our student's thinking, to lead them through a radical change of viewpoint into a whole new area of exploration. 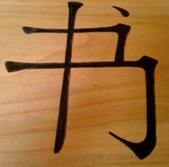 I especially like getting people to ask questions of librarians, who are among my favorite people. As such, this installation questions not only the nature of signage but the nature of the library, and possibly even the nature of information.

Or not. We'll have to wait and see. Maybe it'll just make people annoyed. Maybe people won't see it as this kind of art at all, but simply think that someone at the library decided to hang these beautiful pieces of wood with the strange designs on them as another kind of art altogether.

The Making of Endangered Alphabets

In a series of steps (shown clockwise, below), letters and glyphs are transferred onto carefully selected cherry boards from Sterling Hardwoods in Burlington, Vermont. The letters and glyphs are carved, then painted, sealed and dried over a wood stove for a beautiful - and intriguing - effect.       All photos by the artist, Tim Brookes 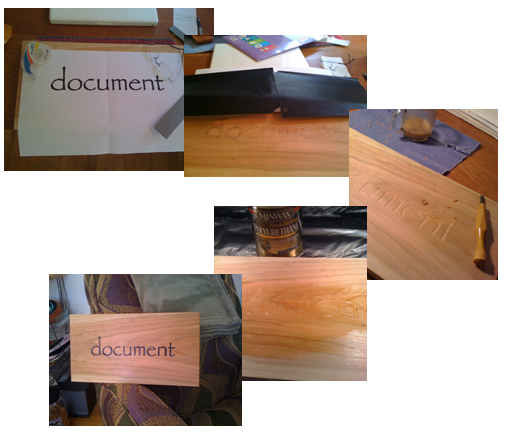