Champlain College Celebrates Opening of Center for Communication and Creative Media on Sept. 26 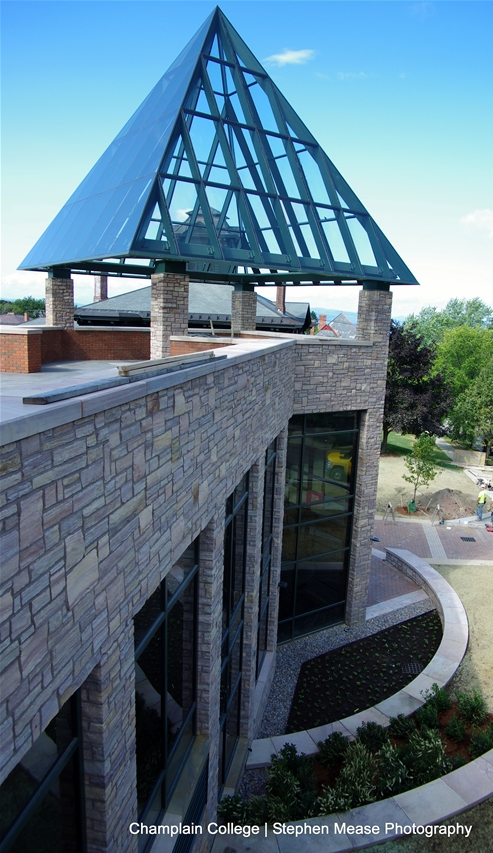 BURLINGTON, Vt. -- Champlain College will celebrate the beginning of a new era of creativity and the arts on Saturday, Sept. 26 with the official opening of the College's new Center for Communication and Creative Media (CCM) at 375 Maple St. The new facility will be open to the public for tours from 10 a.m. to 1 p.m. during Family Weekend. An evening reception for alumni and other invited guests will be held from 5 to 8 p.m.

"This is the gateway to the campus," said President Donald J. Laackman, "and will provide collaborate space for students, faculty and others to gather in and out of the classroom."

The four-story, 42,000 square foot addition to the existing Hauke Center and Alumni Auditorium will serve as the formal entrance to campus and the academic home of the Division of Communication and Creative Media. The CCM building provides faculty offices and classrooms, video game and graphic design labs, studio spaces, a sound filmmaking and broadcast media production stage, art gallery and a collaborative media hub.

"We have built ourselves a world-class academic building," said Dr. Paula Willoquet-Maricondi, dean of Division of Communication and Creative Media. "The building's visually engaging and dramatic architecture will foster creativity, its dynamic and boldly colored interior and furnishing will ignite the imagination and the overall design of the academic and non-academic spaces will enhance the flow of collaboration not only for the CCM Division, but for the entire campus and the local community."

"The design and layout of the classrooms, labs, and studios, and even of the hallways and lounge areas, speaks to and supports everything that Champlain stands for: creativity, innovation, collaboration, integration, synergy, convergence, and interdisciplinary," she added. "this is truly a visual building for a visual culture."

The CCM building is also the transit center for the college's shuttle, home to the expanded Campus Store, offers new dining options and will serve as a premier special events and conference center for special events, meetings and conferences throughout the year.
The $24.5 million project broke ground March 2014 to update the existing Hauke Center and Alumni Auditorium as part of the College's master plan to provide each of the academic divisions with its own home building. Completed in August, this expanded and renovated structure has a combined gross floor area of approximately 75,000 square feet.

To retain architectural consistency, Champlain asked architect Colin Lindberg, who designed the Hauke Family Center and Alumni Auditorium in 1989, to design the CCM building. His work over the past 25 years on numerous buildings on campus will be highlighted at the evening reception on Sept. 26. H. P. Cummings served as the construction manager for project.

"There is a purposeful connection in the proximity of students and faculty to create excitement and collaboration in this building," noted Provost and Chief Academic Officer Laurie Quinn.

In addition to being home to the largest academic division at Champlain, the building contains several other strategic initiatives that will benefit the campus at large, including:

To learn more about the Division of Communication and Creative Media at Champlain College, visit. https://www.champlain.edu/academics/undergraduate-academics/majors-and-specializations