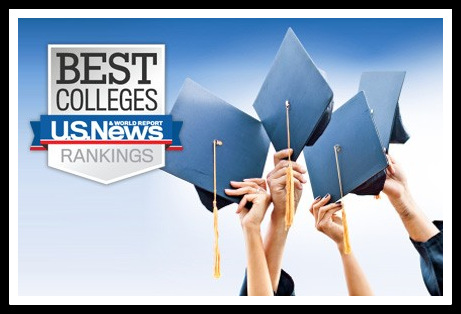 (Sept. 10, 2013) - BURLINGTON, Vt. — Champlain College has been named the number one "Up-and-Comer" regional college in the North according to the 2014 edition of "America's Best Colleges," released today by U.S. News & World Report.

The "Up-and-Comers" ranking comes from a survey of college administrators in spring 2013 who were asked to nominate institutions that they think have recently made the most promising and innovative changes in the areas of academics, faculty, student life, campus, or facilities. Champlain College was most often cited by college presidents, provosts and admissions deans who were asked to identify up to 10 "up-and-coming schools."

"It reflects well upon our commitment to a new educational paradigm," said Champlain College President David F. Finney, "to create a college program designed to prepare students for a job at graduation while also providing them with a wonderful liberal arts curriculum that will enhance the quality of their life throughout their life and successive careers."

"We believe Champlain College offers the most complete undergraduate education available and we are gratified that it is being noticed by our colleagues and our competitors in higher education," added Champlain Provost Robin Abramson.

According to the latest U.S. News' "Best Colleges," Champlain also rose in the ranks to 14th "Best Regional Colleges in the North" which includes all the New England states, New York, New Jersey, Maryland and Pennsylvania. It was ranked 15th in 2013. There are 367 colleges in four regional categories of institutions that focus on undergraduate education and offer a range of degree programs in the liberal arts and professional fields. Four years ago, the annual survey named Champlain College one of the "Up and Coming Schools" in the Northeast.

"The Champlain College community works very hard to ensure our students and families realize every dollar of value for their investment. This recognition is testimony to the unwavering commitment of our faculty and staff to embrace new and innovative ways to engage our students and prepare them for the 21st century job market. Moreover, this acknowledgment demonstrates that our colleagues at other institutions recognize Champlain as a role model in leading change in higher education - it is very gratifying when professional peers notice this important work," added Ian Mortimer, vice president of enrollment management at Champlain.

Sarah Boston Andriano, director of undergraduate admission, told the incoming Class of 2017 at the start of the academic year that they were "academically one of the strongest classes in the history of Champlain College." This year, she said, was also one of the most competitive years for admission in the history of the College. "We had a record number of applications for admission, totaling more than 5,000. The average GPA and SAT score within the applicant pool for your freshman class were also record breaking." 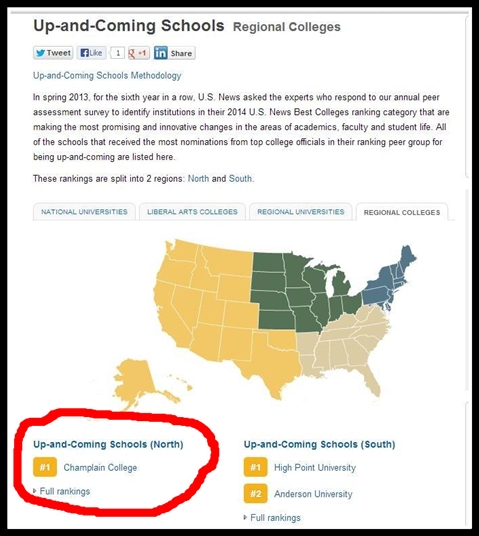 Since 1878, Champlain College has provided career-focused education to students from its hilltop campus in Burlington. Champlain's distinctive educational approach embodies the notion that true learning only occurs when information and experience come together to create knowledge. Champlain offers traditional undergraduate and online undergraduate courses, along with online certificate and degree programs and eight master's degree programs. Champlain students can study abroad at campuses in Montreal, Quebec and Dublin, Ireland.

In describing the methodology used by the editors at U.S. News & World Report, Robert Morse wrote that "For families concerned with finding the best academic value for their money, the U.S. News Best Colleges rankings provide an excellent starting point for the search. They allow you to compare at a glance the relative quality of institutions based on such widely accepted indicators of excellence as first-year retention and graduation rates and the strength of the faculty."

The U.S. News & World Report Best Colleges package represents the most comprehensive look at how more than 1,400 accredited four-year schools compare on a set of 15 widely accepted indicators of excellence. Among the many factors weighed in determining the rankings, the key measures of quality are: peer assessment, graduation and retention rates, faculty resources, student selectivity, financial resources, alumni giving, and graduation rate performance.

A complete summary of the methodology used to rank each school can be found online at www.usnews.com/colleges.

The 2014 edition of the U.S. News & World Report Best Colleges book is available online and will be on newsstands Sept. 24.The ranking system, now in its 12th year, is controversial among many higher education institutions. However, the publication's editors defend its annual lists as a useful tool for parents and students.

According to the authors of the U.S. News "America's Best Colleges," the rankings are "an excellent starting point because they offer the opportunity to judge the relative quality of institutions based on widely accepted indicators of excellence. You can compare different schools' numbers at a glance, and looking at unfamiliar schools that are ranked near schools you know can be a good way to broaden your search. The report uses a range of statistics and criteria such as SAT scores, graduation rates and peer assessment to formulate the ranking. More details are available at www.usnews.com.

ONE OF MANY WAYS TO EVALUATE A COLLEGE

Admission officers at Champlain College agree that the ranking is one way for students to learn about a school. "More importantly, we have found that prospective students are able to make the best decisions about their educational choices after visiting the campus, meeting other students, touring the facilities and using that knowledge to determine if a school is the right fit for their interests and career choices," said Andriano.

"This really compliments our recent top ranking with Princeton Review and speaks to the quality of education that our students experience," Andriano added.

The annual survey, conducted by the Champlain College Career Services Office, also shows that more than half of the seniors who graduated in May 2013 had accepted a job offer or expected to begin a job soon after they received their diploma. Of those with jobs, 88 percent said their post-graduation employment is "very" or "somewhat" related to their career goals.

Champlain College will hold the first of its fall Open Houses for high school seniors on Saturday, Sept. 14, with a full program of information for prospective students, campus tours and opportunities to meet with students and faculty. A second fall open house will be held Oct. 26.

For more information about the Open House, visit www.champlain.edu/fallopenhouse13.