Learn more about the history and evolution of Burlington's most prominent street - Church Street -  at Champlain College's fifth annual local history event, "Church Street: The Heart & Soul of the Queen City," on Monday, May 15.

Professor Thomas Visser and Master's Candidate Adrienne Dickerson of the University of Vermont's Historic Preservation Program will present an illustrated talk titled "Burlington's Historic Church Street." The event will be held from 7 to 9 p.m. in the Champlain Room at Champlain College's Center for Communications and Creative Media at 375 Maple St., in Burlington.

Presentations will begin at 7:30 p.m., and light refreshments will be served. This event is free and open to the public, but seating is limited. To confirm a seat, respond no later than May 8 to historyrsvp@champlain.edu or call 802-860-2785.

(This article first appeared in the Burlington Free Press History Space on April 30, 2017)

For more than 150 years, Church Street has served as the nucleus of downtown Burlington. The street derived its name in the years following 1816, when the First Congregational Society (today the First Unitarian Universalist Society) constructed a brick church that is now the street's iconic landmark.

Initially a quiet, sparsely developed lane, Church Street's four northern blocks had evolved into a major thoroughfare and bustling mercantile center by about 1850. By 1900, upper Church Street featured a dense architectural mosaic of large-scale Victorian commercial structures and older two and three-story Federal and Italianate style buildings, many of which survive today. Featured in this article are a few of the dozens of historic views of Church Street in Champlain College's Special Collections, which tell the story of its evolution over the 19th and 20th centuries.

Since the early 19th century, the block of Church Street between Main and College streets has hosted local government and municipal services. Burlington's first City Hall, a domed brick structure constructed in 1854 on the northwest corner of Church and Main, was replaced with the City Hall building we know today in 1928.

Successive buildings housing the first Chittenden County Courthouse and the first Fletcher Free Library stood in the middle of the block from 1802 through 1925, before being demolished to make way for the new, and much larger, City Hall.

In 1889, the Ethan Allen Engine Company No. 4, a volunteer firefighting and social club, constructed a private firehouse on the lot adjoining what was then the library. The city of Burlington acquired the firehouse shortly thereafter, using it as first the headquarters of its new municipal fire department, then a police station, and finally an educational center before converting it to the Firehouse Gallery for Burlington City Arts in the 1990s.

By the mid-19th century, the four northern blocks of Church Street were filled with hotels, banks, restaurants, druggists, grocers, newsstands, dry good merchants, jewelers, and more. Two of the earliest surviving commercial buildings on Church Street are located at its intersection with College Street: the 1847 Sherman Building and the adjoining 1830 Abraham Building, now occupied by Leunig's Bistro & Café and Danforth Pewter. For many years, the Sherman Building housed a series of drugstores, including F.L. Taft.

Traveling north, the intersection of Church and Bank Streets is dominated by the Howard Opera House, constructed in the late 1870s by the philanthropist John Purple Howard, a member of the prominent local family that founded Burlington's Howard Center. The Opera House's distinctive arched upper-story windows were designed to illuminate its auditorium space, which accommodated more than 1,100 patrons. Readers may recall this building as the location of Magram's department store in the mid- to late-20th century; it is now occupied by Ecco Clothes for Women & Men, Pascolo Ristorante, and Frog Hollow Vermont State Craft Center, among others.

One block up, another local landmark, F.W. Woolworth Company, stood on the southwest corner of Church and Cherry Streets for almost 100 years. The five-and-dime chain store first occupied the ground floor of a three-story brick commercial structure constructed in about 1905. The company built the one-story concrete-block building we know today in 1964. Woolworth's closed in 2000; the building now hosts Panera Bread and Outdoor Gear Exchange.

The seven-story New Sherwood Hotel stood on the corner of Church and Cherry Streets, the current location of CVS Pharmacy This is a postcard from C.W. Hughes &amp; Co., c. 1915. (Photo: Courtesy Champlain College)
Upper block of Church Street

The late 19th century brought a building boom to the upper block of Church Street. The seven-story New Sherwood Hotel stood on the corner of Church and Cherry Streets, the current location of CVS Pharmacy, from 1893 until it was destroyed by fire in 1937. The hotel lobby was located on the second floor, above ground-level storefronts occupied by J.C. Penney and Sears, Roebuck & Co.

The Masonic Temple and Richardson Building, which stand opposite each other at the head of Church Street, were also constructed in the 1890s. The Masonic Temple contained commercial space on the street level, with a series of meeting rooms for the Grand Masonic Lodge of Vermont above. The Richardson featured retail space on the ground floor and apartments on the upper floors; it was occupied by the venerable Abernethy's department store from about 1910 to 1982. 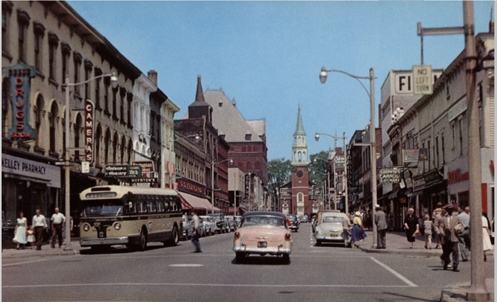 Through the years, eye-catching signage attracted customers to many Church Street businesses. Several buildings had large-scale advertisements painted directly on the brick, including a one-story-tall display promoting Paine's Celery Compound, a patent medicine manufactured in Burlington, which was painted on the southern side of the Howard Opera House from about the 1890s through the 1940s.

A gigantic mortar and pestle advertising a pharmacy was fastened over the corner storefront of the Howard Opera House in the 1930s, and a doughnut-shaped sign hung above the entrance to The Downyflake Shop, a bakery and luncheonette on Church Street between Cherry and Pearl in the 1930s and 1940s. By the mid-20th century, illuminated signs projected from the storefronts of diners and cafes, hotels, drugstores, soda fountains, and other businesses on the street. In the 1940s, for example, Dr. Pearl Cynthia Davis advertised her optometry business on upper Church Street with both neon lettering and electric light bulbs arrayed in the shape of eyeglasses.

From horses to trolleys to cars

The street's infrastructure has also evolved over the years, following its growth and development as well as new technological advancements. In the 19th century, the street teemed with horse-drawn carriages, freight wagons, and trolley cars. Trolleys served as Burlington's main form of public transportation from 1885 to 1929; first pulled by horses, they were electrified in the early 1890s, at which point tracks were installed running down the center of Church Street and many others in town.

In the early 20th century, after automobiles replaced horse-drawn vehicles, hitching posts disappeared from the sidewalks on Church Street. Buses replaced the trolleys in the 1920s, and the trolley tracks were removed in the 1940s. In the late 20th century, after the establishment of the Church Street Marketplace, the upper blocks were closed to vehicular traffic and converted into a pedestrian mall: first the two blocks between College and Cherry Streets (1980), and later the sections between Cherry and Pearl (1994) and Main and College Streets (2005).

Today, Church Street remains the heart and soul of Burlington. The street itself thrives as a bustling commercial center, and its historic architecture is remarkably well preserved, providing distinctive character to this beloved part of our Queen City.