The settlement resolves the final legal issues related to the denial of the project by the Development Review Board on April 3, 2014 and its subsequent appeal by Champlain College.  The agreement follows unanimous City Council approval of the draft agreement on Feb. 17, 2015 and clears the way for the 104-unit project to move forward.

The Eagles Landing project will create new purpose-built, well-managed student housing in the downtown and help relieve pressure on the Burlington housing market.  As part of the mediated agreement, Champlain College has agreed to lessen the size of the building and incorporate exterior material changes to better fit the neighborhood.

In addition, the College has agreed to work with the City and members of Preservation Burlington to create a "Neighborhood Stabilization Program."  The program, one of the 17 strategies outlined in the City's draft Housing Action Plan, calls for developing proactive steps to enhance neighborhood quality of life in the historic neighborhoods surrounding Champlain College and the University of Vermont.

"Today's announcement demonstrates that it is possible to try new approaches to our long-standing student housing and neighborhood challenges," said Mayor Weinberger. "I am pleased that many parties have found a way to come together to significantly improve and support this important project.  I also am optimistic that this agreement will spark broader neighborhood quality of life improvements in the years ahead."

"Champlain College has a long-term goal of housing all our students in college managed units or in off-campus facilities that work well with our neighbors," said David Provost, Champlain College Senior Vice President for Finance and Administration.  "The agreement to move forward with the Eagles Landing student housing project reflects thoughtful input from the community and a design that will work well within the existing neighborhood."

"Today's announcement is good news for the City's neighborhoods," said City Councilor Karen Paul (Ward 6).  "I am pleased to see a collaborative effort among community partners not only to take steps to address the housing affordability challenges in our City, but also to take a creative new approach toward long-standing quality of life issues." 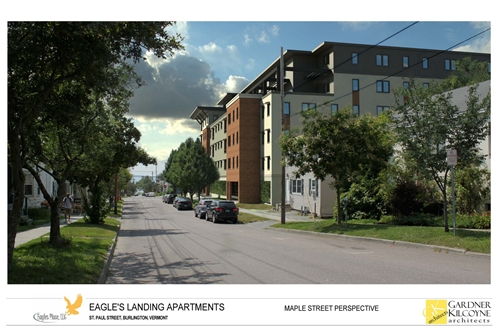 The agreement clears the way for the conversion of two unsightly and underutilized downtown sites along St. Paul Street - the Brown's Court parking lot and the vacant Eagle's Club - into a vibrant mixed use block of street front retail with housing above.  The project will include 104 dwelling units containing about 290 Champlain College students, contributing to the Mayor's goal of building 1,500 new student beds in five years to decrease the number of students living in historic neighborhoods by approximately 50 percent, and also will include retail and outdoor café space on King, St. Paul, and Maple streets.

The parties worked out final design modifications aimed at enhancing the compatibility of the project's design with the scale and character of the surrounding neighborhood.   Modifications included significantly more use of brick to blend with surrounding historic buildings and refining the window design and cornice details along the St. Paul Street, King Street, and Brown's Court elevations.

The project also will increase public parking supply by replacing the current 42 spaces at Brown's Court with 65 public parking spaces under the building - an increase of 23 spaces.  The agreement clarifies the management of those spaces for public use.  The project is expected to generate as much as $400,000 annually in new property taxes. 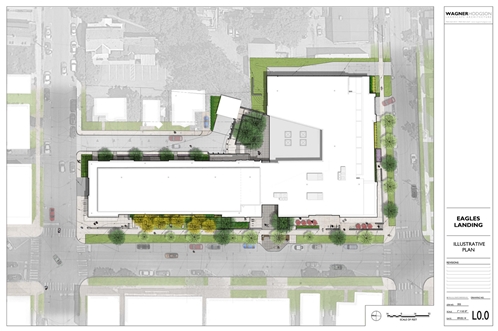 In a Memorandum of Understanding (MOU) signed by the City, Champlain College, and Preservation Burlington, the partners have agreed to work collaboratively to advance livability issues through the "Neighborhood Project,"  a strategic plan to be prepared by professional housing, planning, historic preservation, and real estate professionals.  According to the MOU, the Neighborhood Project would develop "an overall strategy and toolkit of policies and programs based on national best practices," including

•           Review of and recommendations based on successful neighborhood livability initiatives in other university communities like the UniverCity Neighborhood partnership in Iowa City, IA, and the Preserving the Neighborhood initiative in Lancaster, PA; and

•           Next steps to implement the recommendations in Burlington. The City of Burlington and Champlain College each have committed $25,000 and Preservation Burlington has committed $5,000 toward this effort.  The funders will work equitably and collaboratively to draft a scope of work, select the consultants, and provide input and feedback throughout the process.