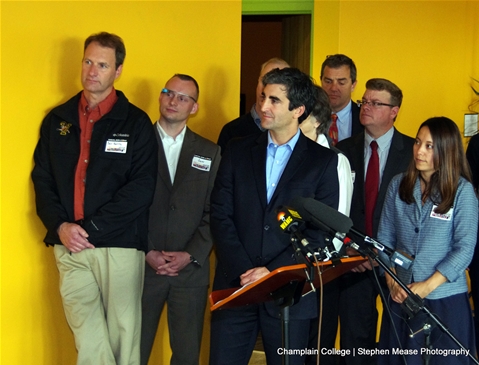 (October 15, 2013) Burlington, VT - William Wallace, executive director of US Ignite, today announced that the City of Burlington has been named a US Ignite partner. Mayor Miro Weinberger announced that Burlington has branded its local Ignite initiative "BTV IGNITE: New England's Gigabit City" and launched a new website, as well as introduced his BTV IGNITE Advisory Group. Further, Weinberger encouraged the public to attend and participate in the upcoming 7th Annual Vermont Tech Jam, scheduled for this Friday and Saturday at Memorial Auditorium.

At a news conference in the Dealer.com rooftop solarium, Wallace stated the following about the City of Burlington's qualifications for this designation: "US Ignite is pleased to welcome Burlington as its newest partner community. A number of important assets make Burlington uniquely situated to take advantage of this pivotal time in next-generation networks: capacity for City-wide gigabit access; density of research and education networks; vibrant tech business culture; core capabilities in key research areas; and a community with an intense entrepreneurial mindset and an enviable quality of life."
US Ignite is a non-profit organization set up with inspiration from the National Science Foundation and White House Office of Science and Technology Policy, both of which strongly believe that it is a 21st century competitive necessity for the US to take advantage of next-generation technologies. US Ignite launched last year at the White House and operates today with a staff team supported by corporate, foundation, and community partners. Its mission is to foster the creation of 60 next-generation Internet applications - across 200 communities, like Burlington - applications that provide transformative public benefit in six sectors of the economy: healthcare, education, public safety, energy, transportation, and advanced manufacturing.

Flanked by a diverse, dynamic, and talented Mayor's Advisory Group, including Champlain College Senior Vice President of Finance and Administration David Provost, Associate Vice President of Information and Security at Champlain College Ted Laskaris, and Champlain College Trustee Michael Metz,  Mayor Weinberger spoke about Burlington's new designation: "While Burlington is already a strong city for tech companies and innovators, today's launch of BTV IGNITE is about making Burlington a great tech city - an authentic place with a rich ecosystem of tech companies and talent that are innovating, creating, and growing opportunity for all."

BTV IGNITE - the name of the Burlington-US Ignite partnership - will encourage public, private, and academic institutions to develop next generation Internet applications in Burlington. BTV IGNITE is dedicated to aligning Burlington's powerful gigabit infrastructure as a tool, test bed, and accelerator for economic, educational, and community benefit.

In an interview with Jack Thurston of New England Cable News, Provost said "It kind of does allow Burlington to position itself as a tech hub. It sets a stage to allow innovation in the next generation of the internet in being able to do things we haven't yet been able to dream of."

The 2,300 students at Champlain College have power at their fingertips, because they're in a community that has city-wide access to internet speeds 100 times faster than the U.S. average, and capable of huge file transfers quickly. "The potential is significant, it's what do we with it," Provost said.

Provost said he is excited about how the school can tap into US Ignite's brand-new networking opportunities with other plugged-in cities around the country like Chattanooga, Tenn. and Cleveland, Ohio. The idea-sharing and new resources could help Champlain expand its programs in video game design, cyber-security, and digital forensics, Provost noted. "The potential is significant," he said.

To offer a further sense of what Burlington's relationship with US Ignite could lead to, the Mayor and Wallace shared a video - from a June 2013 US Ignite App Summit. Also, the Mayor launched the new BTV IGNITE website.

The BTV IGNITE Advisory Group will focus its work on the following areas to forward Burlington's tech economy:
• Enhancing the existing technology infrastructure in the community;
• Developing a Gig Initiative to provide Gigabit connectivity to Burlington students and community facilities;
• Supporting a calendar of local events focused on energizing and supporting the tech community;
• Encouraging the creation of spaces that generate innovation and collaboration, such as makers/co-working and research and development spaces within the City;
• Identifying, supporting, and building on Burlington's core capabilities around which next-generation applications can be built;
• Developing talent through mentoring; and
• Recruiting new business and new tech workers.

"Dealer.com is thrilled about the opportunities presented by BTV IGNITE for all existing and future tech companies in Burlington," said Rick Gibbs, president and CEO of Dealer.com, who was represented at the announcement by Chris Yager, director of enterprise systems for Dealer.com. "The BTV IGNITE effort will help Dealer.com and others with both retention and recruitment by growing an even more diverse tech community, spurring creativity, and creating greater excitement about Burlington as a tech center."

The Mayor shared that he would be kicking off the 7th Annual Vermont Tech Jam at Memorial Auditorium on Friday at 10:15am, during which time he would announce near-term initiatives that touch on these areas. The Mayor also encouraged the public to attend an 11am Tech Jam panel discussion - entitled "Sparking Burlington's Future" - that he will be moderating and will include Wallace, other national tech leaders, and local community leaders.