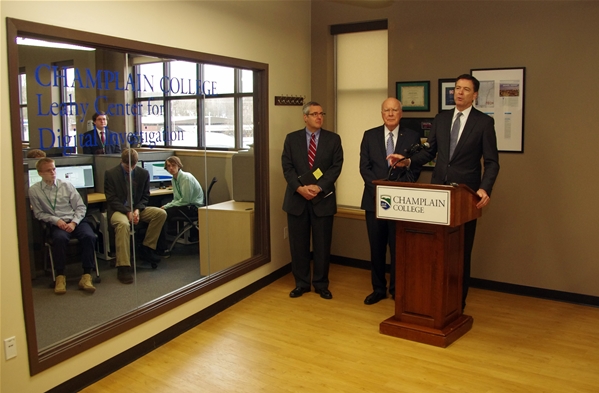 BURLINGTON, Vt. (AP) - The head of the FBI used a Friday visit to Vermont to urge college students studying ways to fight cybercrime and conduct digital investigations to take their talents and training to the FBI.

"It's where all of America is, and so those who would do us harm - hurt our kids, hurt old folks, hurt infrastructure, steal our secrets, that's where they come," Comey said. "So if we're going to be effective in fighting those bad guys on all those dimensions we've got to be effective in the digital space."

Comey was accompanied by U.S. Sen. Patrick Leahy, who helped secure some funding for Champlain. The two learned about projects students are working on.

"And those folks are people like the folks here at the center. I told them all 'You've gotta come work for the FBI. Don't go working for any fancy private companies.' That is the future in more ways than one," he said. "We are only going to be successful if we attract the brains and the creativity we need to fight a criminal threat, a terrorist threat and an espionage threat that is getting increasingly sophisticated."

Champlain President Donald Laackman said he wants his school to be the "finest small professionally and globally focused college in the country." He said the Leahy Center positions the school for that distinction.

Reprinted from the Associated Press.

(Photo below) LCDI Director Jonathan Rajewski leads U.S. Sen. Patrick Leahy (VT-D) and FBI Director James Comey to the Leahy Center for Digital Investigation for a tour and to talk with cybersecurity students at Champlain College. 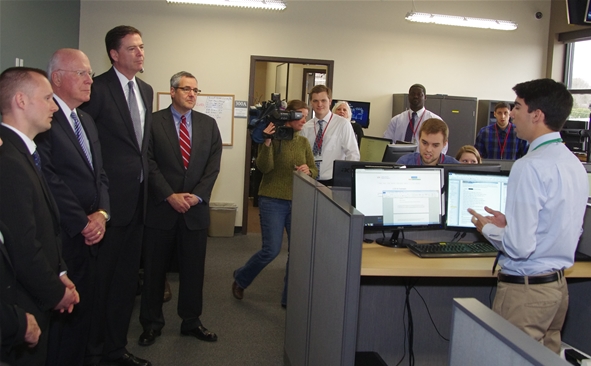