BURLINGTON, VT—Champlain College will welcome The Heritage Edition of the Saint John's Bible to campus for one year beginning Jan. 19. The Saint John's Bible (SJB) is the first handwritten illuminated Bible of its scale in more than 500 years. The Heritage Edition is a full-size, fine art reproduction of the SJB, as the original is on display at the Saint John's Abbey. The SJB is so large, boasting 1,500 pages, that it is organized in seven volumes; Champlain will be hosting the volume of the New Testament containing Gospels & Acts.

The Saint John's Bible residency will enhance teaching and learning in the Champlain community, according to Elizabeth Beaulieu, dean of the Core Division at Champlain.

The College will host a multi-denominational blessing and welcome reception on Monday. Jan. 19 to inaugurate the year-long celebration. The event, open to the public, will be held from 5 to 6 p.m. in the Miller Information Commons on campus.

Because the original pages require significant care, world-renowned calligrapher, illuminator and senior scribe to the Queen of England Donald Jackson, artistic director of the SJB, directed the creation of the Heritage Edition (HE) so that the SJB can be shared with the world. Many colleges and universities have hosted a volume of the Heritage Editions for a year. While at Champlain, the SJB will primarily be found on display in Miller Information Commons, residing in a handmade case of Vermont cherry built by Champlain College senior Zachary Sittler. The book will occasionally visit classes or local establishments while in Burlington. 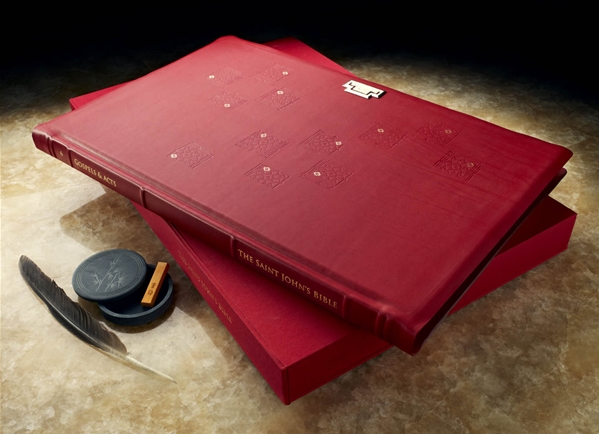 "Potential visitors may be wondering why a secular institution such as Champlain College is interested in hosting the Bible for a year," Beaulieu noted. The mission of the SJB is "to ignite the spiritual imagination of people around the world of all faith journeys." In addition, the SJB exemplifies the best of innovative interdisciplinary work; historians, artists and the theologians labored to illuminate sacred scripture with beautiful design while putting a contemporary spin on a timeless narrative. This reflects many of themes of interdisciplinary education, innovation, inclusivity, creativity, and social justice that resonate throughout Champlain's curriculum.

"At Champlain we celebrate such inclusiveness, and we hope that the Bible's visit on our campus will inspire a similar spirit of daring and creativity," stated Beaulieu.

Many 2015 events featuring the SJB are planned, including:

Organizers are also planning a Brown Bag and Bible Lunch Series open to members of the Champlain community. The series of four lunchtime discussions from a variety of perspectives about the SJB and its place as a work of art, a religious text, a mediator of symbolic power, and a representation of human culture begin on Tuesday, Jan. 20.

Brown Bag with the Bible Lunch Series, Bring a lunch—dessert provided! Aiken Hall, Morgan Room, 12:30 pm - 1:30 pm. Join us for discussions from a variety of perspectives about the Saint John's Bible and its place as a work of art, a religious text, a mediator of symbolic power, and a representation of human culture.

The SJB project began in 1998 when Saint John's Abbey and University in Minnesota offered the commission to Jackson. He worked for fifteen years with a team of researchers, scribes, and calligraphers to produce the Bible. Endeavoring to replicate medieval techniques, Jackson used calfskin vellum, hand-cut goose quills, and paints made from hand-ground precious minerals and stone. Silver, copper and 24-karat gold leaf embellish the illuminations. The original is on display at the Abbey.