Questions? We Have Answers!

Sophomores and upperclass students can live in one of Champlain's beautifully restored Victorian mansions or our contemporary residence halls.

All Champlain College residence halls have ultrafast Wi-Fi, live and on-demand streaming TV and movies, and are smoke- and substance-free, co-ed communities. 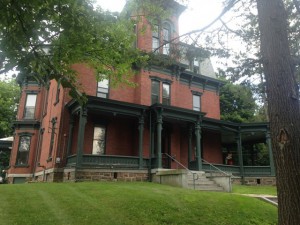 Champlain's newest addition, 158 South Willard is located on the corner of Main Street and South Willard in the heart of Burlington's coveted Hill Section. Built in the Second French Empire style but recently renovated, the 13-bedroom mansion is full of life. It's home to 29 Champlain students. Residents love 158 South Willard's ornate woodwork and marble fireplaces (though, sadly, no fires are allowed inside), as well as the convenience that it offers to both Champlain's campus and many popular Burlington attractions.

A Brief History Designed in 1877 by a local architect for General William Wells, 158 South Willard is one of over fifteen surviving Fisher buildings in Burlington. After serving in the war, Wells went on to take charge of a successful pharmaceutical business from his father, eventually expanding to have offices all over the world, including branches in London, Montreal, and Sydney. After his passing, Wells passed on his fortune to his daughter, Bertha, and her family. In 1972, University of Vermont's Phi Gamma Delta Fraternity acquired the building, but in 2017 turned it over to Champlain with a lease of up to five years. 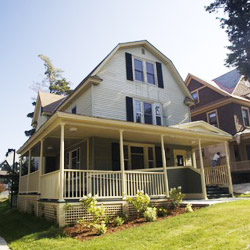 One of our smaller, more intimate residential settings, 308 Maple is a Victorian mansion that is home to a small community of 14 returning students. It is conveniently located on Finney Quad, close to the center of campus.

Students love Adirondack Hall for its small, intimate setting. Part of our sophomore year experience, the building houses only twenty students in beautiful, spacious rooms. The building, a former carriage house, was recently renovated. While it now features many modern niceties such as newer furniture and air-conditioning, it still possesses its historic architecture and charm.

A Brief History Adirondack Hall was built in 1897 for the Smith family. Charles Plympton and Anna Pease Smith resided in what is now McDonald Hall and used the Adirondack building to house their carriages. It was later converted into a residence for Levi Smith, President of the Vermont State Senate and grandfather of Charles Plympton Smith. Champlain acquired the property from the Smith family in 2004 and renovated it in 2008. 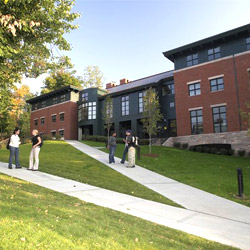 One of our campus' most popular living options, Boardman Hall is a favorite of students who desire the privacy of single rooms with the convenience of living on the main campus. Each of the suites has its own common space for students to convene and study or socialize, and includes its own washer/dryer unit. Students in Boardman Hall participate in the meal plan; however, the building also includes a small kitchenette area perfect for making a late-night snack.

Boardman provides Break Housing during periods when the rest of campus is closed, making it ideal for international students or those who live farther away. 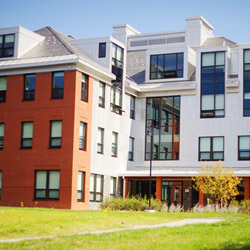 Butler, Juniper and Valcour Halls are Champlain's newest facilities, opened in 2012 and 2014. These buildings are part of our sophomore year experience and feature all single and double rooms, a large common area on the first floor, small study/lounge areas throughout. Juniper Hall also has a ski/snowboard tuning room that is available to residents of all Champlain College residence halls. These three residence halls are named after islands on Lake Champlain, which is very appropriate as the buildings feature multiple two-story windows looking out onto Burlington's greatest natural attraction. The buildings were also designed with the environment in mind, as its construction meets the highest standard of sustainability.

A portion of one of these buildings is held for two special residential programs: the substance-free program and gender-inclusive housing. Residents of the substance-free program sign an agreement to live a lifestyle free from the effects of alcohol and drugs. Our gender-inclusive housing program is designed to provide students an opportunity to develop a deeper understanding of the diverse gender identities in a supportive and safe residential environment. All students in this area go through Safe-Zone training.

Juniper and Valcour halls both provide Break Housing during periods when the rest of campus is closed, making it ideal for international students or those who live farther away.

Cushing Hall is located in the center of campus and is home to 30 returning students. Formerly an academic office building, Champlain renovated Cushing Hall in 2005, making it one of Champlain's newest, air conditioned residence halls. From Cushing, it is just a short walk to the IDX Student Life Center, dining hall, fitness center, and academic buildings. Although Cushing may not look like a Victorian-era home, it is very popular because of the location and the personal privacy it offers. Students in Cushing Hall are very connected to one another. Students take it upon themselves to be welcoming and energetic about opening their rooms to other residents.

A Brief History The land for this house was acquired in 1871, and the house built in 1872 by George Bigelow for his sisters, Susan and Elizabeth Bigelow. George Bigelow is listed as a border in the house from 1872-1883. He is identified as the Assistant Editor for the Burlington Free Press and Times in the 1870's, but later is listed as "Special Agent USPO Dept." After its use as a residence by the Bigelows, the house passed through a number of owners, including Clarence Morgan, who built Freeman Hall as a carriage barn. In the 1950's, Cushing was converted to four apartments. Champlain College purchased the house in 1962, its third acquisition in the Hill Section of Burlington, and converted it to multi-purpose use for the College. It was named to honor Ruth Cushing, Marjorie Freeman Brouilette's mother. 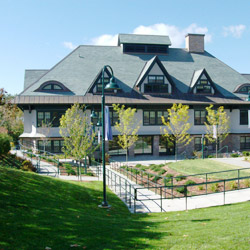 80 sophomore students feel lucky to live in this residence hall located close to the center of campus. Residents love Lakeview’s game room with its pool table and television. There is also a formal living room located on the first floor. There are 39 rooms at Lakeview; many facing west with beautiful views of Lake Champlain. Many student rooms have wood floors and radiant heat, and all rooms are air conditioned. The distinctive wall colors in student bedrooms are very popular.

Located only two blocks north of the main campus, Victorian mansion North House is one of our smaller residence halls. North House offers an ideal combination of personal privacy, comfort, and the traditional Champlain residence hall experience. Residents of North House describe the community as warm, comfortable, homey, and intimate -living in this residence hall is just like living in a big house! North House contains approximately twenty residents. North House is a very short walk to downtown Burlington, making its location the ideal spot, nestled within a quiet neighborhood between the Champlain campus and Burlington attractions.

A Brief History North House was designed and built by the architect A. B. Fisher for Riley Stearns, a druggist. Mr. Stearns died in 1902, but his widow continued to live there until 1917, when the house was sold to William Stone, who is listed as "retired." The next owner was the McSweeney family, which produced three Burlington physicians: Patrick, Katherine, and Douglas. In the early 1960's the house became a co-op run by Mr. and Mrs. North. When Champlain College purchased the co-op in 1966 and converted it to a residence hall, Bader Brouilette decided to leave the name as North House, to honor the couple who had provided housing for Champlain students.

A Brief History Sanders Hall was built in 1865 for the Turk family, who operated a department store on College Street in Burlington for many years. The family lived in the house until 1921, when for a short time it was used as a fraternity house. It was then sold to the University of Vermont and used as a dormitory. The house was named Sanders Hall after Daniel Sanders, who was the first president of the University of Vermont. When the building was purchased by Champlain College in 1967, Bader Brouilette decided to leave the name of the building unchanged.

READ ABOUT OUR RESIDENCE HALLS ON THE VIEW

First-year student and returning students at Champlain live in one of our 21 renovated Victorian-era houses on campus in the Hill Section of Burlington.

From living in contemporary buildings that meet top sustainability standards, to finding a like-minded community, returning students have the chance to match their housing to their lifestyle.