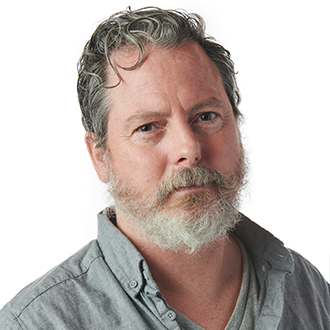 John Rasmussen is an Assistant Professor for Visual and Performing Arts: Film & Photographic Arts in the Division of Communication & Creative Media. He is a filmmaker working in narrative, documentary, and experimental forms. His work ranges from project documentation for organizations such as Oxfam, The United Nations Ethical Fashion Initiative, and Americorps to grassroots local narrative filmmaking in the U.S. and Haiti.

Rasmussen's work has been exhibited in festivals in Mexico, Haiti, France, Canada, China, and the United States. He has taught a wide variety of courses in filmmaking at The University of Miami, Miami International University of Art and Design, and Le Centre d'Art in Port-au-Prince, and he founded a film group in the neighborhood of La Savane in Les Cayes, Haiti.

Short film – co-directed with Al Larsen
Party Words
The movie is a mock game show, modeled on Hollywood Squares, featuring multiple vignettes (channel flip style) drawing from television history. The production explores the compression of language, time, and politics. During a late-night solitary channel surf, the viewer slips in and out of consciousness, between dreams, fears, paralysis, aphasia, regrets, and hopes. These imaginings and feelings begin to converge with the televisual landscape that the set emits.

Short film – co-directed with Al Larsen
Song of Myself / What's Wrong with You
The pace of commercial culture is speeding up and the ability of marketers to target messages at individuals is intensifying. However, the rhythms on which human culture is based—the daily rising and setting of the sun and the yearly path of the earth around the sun—remain. As we seemingly head toward crises of meaning, of social cohesion, and of environmental imbalance, these cycles maintain their regularity. Referencing the history of televisual media, from the human fascination with the setting sun through the mass media of film, television, and radio and our solitary interactions with computer-voiced phone systems, this video addresses the pressures on identity formation in a media-saturated environment headed toward crisis. Kuleshov's early demonstration of film montage and Walt Whitman's romanticism are juxtaposed with commercial come-ons. As meaning breaks down, the image of Kuleshov's impassive viewer remains, processing both the natural cycle of the setting sun and the circulating detritus of advertising pitches.

"RULE EIGHT: Don't try to create and analyze at the same time. They're different processes."