Vermont Ranks #2 in the Country in Overall Health for the 2nd Consecutive Year!

This year, Vermont scored in the national "Top 10" in 18 of the report's 34 measures, including infant mortality (#2), access to health insurance (#3), air pollution (#5), high school graduation rates, premature death, and low birthweight (all at #9), and public health funding (#10).

Vermont Ranked Among the Happiest States in the Country

Vermont is home to not only the Green Mountains and maple syrup but there is a booming economy revolving around local businesses and agriculture.

According to an article by CNBC, "The Green Mountain State takes its name from the verdant range that defines this state, but Vermont is more than just mountains. It's more than maple syrup, too, though Vermonters will proudly tell you the state accounts for 39 percent of the nation's total production. Vermont is one of America's healthiest states by many measures, from infectious disease rates to the percentage of residents without health insurance. The crime rate and pollution are among the nation's lowest."

Burlington is such a distinctive city, it shows up in the top of many "best" lists. In fact, the city ranks eight on Kiplinger's list of the Best Cities for the Next Decade.  For a city ahead of the trend on the green movement, it's no wonder that the Burlington community is environmental and community oriented, and home to 22 LEED-certified buildings.

In a community where strangers say 'hi' on the streets, it's no wonder why you'll feel right at home in Burlington, Vermont. 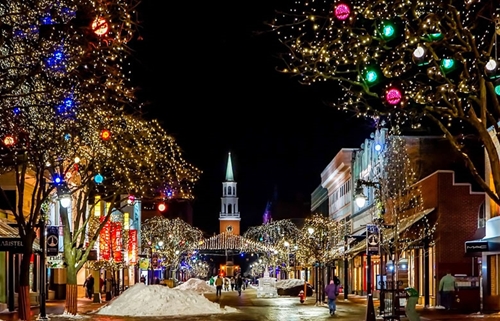 Burlington is known for its diverse restaurants that source their ingredients from local farms.  Many restaurants have joined the Vermont Fresh Network, and Vermont has a strong following in the Slow Foods Movement; CSA's; farmer's markets; natural food stores, including City Market and Healthy Living Market; in addition to the many farms surrounding the area. Not only is Burlington in the healthy living lifestyle, but it is also the home to nationally recognized chefs, locally grown food, and 13 different types of international cuisine.

View our current open positions or add your resume to our database if a desired position is not currently available.