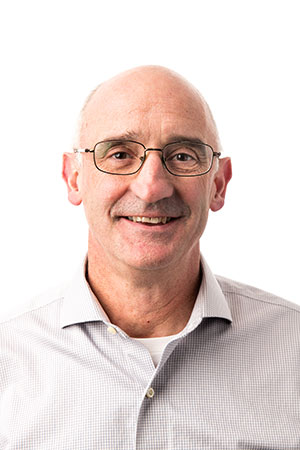 Dr. Scott Stevens is Dean of the Division of Information Technology & Sciences (ITS).  Prior to accepting the dean position, he was a Professor of Mathematics and the Mathematics Coordinator at Champlain College since 2007.

He received his Ph.D. in 1999 from the University of Vermont in Applied Mathematics. He spent his early years as a research mathematician and Assistant Professor at the University of Montana and Penn State Erie. During this time, his research focused on intracranial fluid dynamics with funding from NASA and NSF.  This resulted in over 15 peer-reviewed journal articles and a U.S. Patent.  Upon coming to Champlain College in 2007, Dr. Stevens focused his energy on the art/science of teaching mathematics and statistics to undergraduate students. He has taught and developed many different math courses for the college and published two textbooks.

When he's not enjoying time with his family, he can often be found wading the rivers and streams of Vermont seeking the elusive Brook Trout.