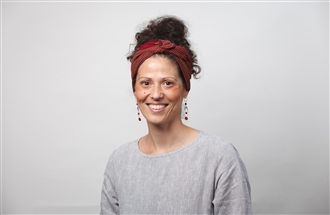 Veruska Cantelli received her Ph.D. in Comparative Literature from the Graduate Center of the City University of New York. Before joining the Core Division at Champlain College, she was an Assistant Professor of Rhetoric and Interdisciplinary Studies at the Center for Global Communication Strategies at the University of Tokyo. She also taught Comparative Literature at Queens College, CUNY with a focus on literature of war and women's autobiographies, particularly on non-western narratives of the self.

Her research on women's autobiographies of the "non-self" explores the principle of selflessness in relation to questions of truth, gender, and community, as well as the debates about authenticity and representation.

She collaborates with Warscapes, a literary magazine that showcases art, literature, and reportage of war, and provides new perspectives for understanding conflict. She is currently writing about Japanese writer Tomioka Taeko and the relation between performativity and literature. Her areas of concentration are: Women Studies, Life Writing and Storytelling, Postcolonial Literature, Literary Theory, Conflict Studies, Poetry, and Digital Humanities.

She studied modern and contemporary dance at the Mary Anthony Dance Studio and at the Trisha Brown Studio in New York and has performed with the Human Kinetics Movement Arts. She is serious about Lazio, the soccer team that brought football to the city of Rome in 1900.

2020 - "The Dance of Bones: Tomioka Taeko's Stage of Reprobates"Otherness: Essays and Studies, Centre for Studies in Otherness, Aarhus University

2015 - "The Bundle on my Back" in Africultures: an in-depth conversation with writer Cristina Ali Farah. January 2015

2013 - Editor and Translator of "Narrating Absences, Narrating History" on the photographs of desaparecidos by Argentinian artist Gustavo Germano, Warscapes, August 2013

2013 - Curator of the Retrospective Food on hierarchy of taste and consumption of "otherness," Warscapes, June 2013

2013 - Curator of the Retrospective Visas on migration, surveillance and militarization of space, Warscapes, March 2013

2013 - "Eye on Honduras," a conversation with historian Dana Frank on the human rights crisis after the coup, Warscapes, January 2013

2012 - Curator of the Retrospective Uncertain Borders on the work of Gloria Anzaldùa, Warscapes, October 2012.