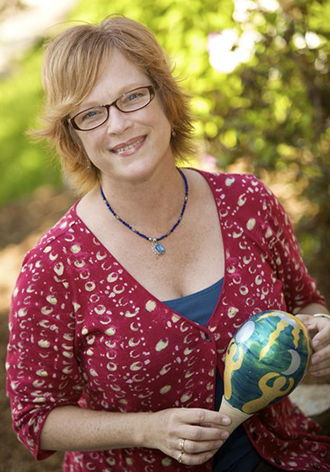 Kerry Noonan holds a Master's Degree and a Ph.D. in Folklore and Mythology from UCLA, and her research focuses primarily on new religious movements, and women's roles in various religions; she has published articles on Catholic Charismatic women, online religious communities, feminist witchcraft, Goddess spirituality, and New Age religious folk art.  In addition, she is a specialist in Celtic folklore and folk belief, as well as having studied  Afro-Caribbean religions, and has published articles on the Haitian Vodou spirit Gran Brijit, and St. Brigid of Ireland, most recently in the anthology Brigit: Sun of Womanhood, edited by Patricia Monaghan and Michael McDermott.

"In today's world, you need to be a creative and critical thinker, one who can make connections between seemingly disparate things - that's what we train you to do in the Core Division classes.  We work your "academic core" muscles, so you can be better prepared to do what you want to do," she said. Here at Champlain, she teaches a variety of the Core Division interdisciplinary courses, and was responsible for developing the second year Heroines and Heroes course, as well as third year courses on China's ethnic minorities and China's supernatural beliefs. Inspired by her Champlain-funded study tour of China in 2009, she has devoted the last few years to research on the impact of tourism on China's 55 ethnic minority communities, and on Chinese vernacular religious beliefs and practices.

Before coming to Champlain, Kerry taught at UCLA, California State University Northridge, and Otis College of Art and Design. Formerly a professional actress in film, theatre, and television in Los Angeles, Kerry has brought her "prior life" to bear here at Champlain by directing and acting in Champlain Theatre productions, and by co-teaching the senior capstone in the Filmmaking major.

She is a member of the American Folklore Society, the American Academy of Religion, and Folklorists in New England, has presented papers at numerous national and regional scholarly conferences, and has received the Elli Kongas-Maranda award for scholarship on women's folk culture.

Born in New York City, she spent most of her life in Los Angeles before moving to Vermont in 2008.  She feels lucky to have an office with a spectacular view of Lake Champlain.

My friend, Therese, in Los Angeles made this gourd rattle for me several years ago. She never used to think she was an artist, much to my surprise. When I look at it, I see not only its beauty-it also reminds me of the importance of good friends in my life and the amazing creativity of ordinary people.