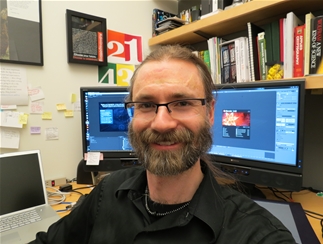 Prior to arriving at Champlain, Prof. Ferguson's first career was in Software Design in the Computer and Information Security fields. He tired of the escalating arms race, and quit to pursue more artistic endeavours. He then worked on a number of game prototypes at an educational research firm (EduMetrics Institute) and wrote a number of grant proposals. He then relocated to Vermont and joined the ranks of Champlain College Faculty. Until 2012, he served as the Director of Technology at a Burlington, VT, based game media start-up: Hoozinga, Inc.. Hoozinga created a game to help people quit smoking, called My Quit Kit and Khemia, which is available from the Vermont Quit Network.