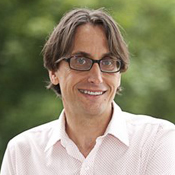 Al Larsen is an Assistant Professor and Coordinator for Interaction Design in the Division of Communication and Creative Media. He is a media artist working in performance, sound and physical computing. His work engages ideas of public space, participatory culture and embodied interaction. His teaching and research draws on a deep background in DIY (do it yourself) culture including independent publishing, studio recording and performance. Lately he has worked with responsive systems, building electronic circuits and programming software tools for interactive performances.

Al's work in sound art has been exhibited in festivals in Brazil, Poland, Italy, Argentina, the UK and the United States and he has given dozens of performances in venues ranging from theaters and art galleries to sidewalks, rooftops and rec rooms. His writings on art, popular culture and youth subculture have appeared in Careless Talk Costs Lives, Plan B and The Squealer. Al received his MFA in Media Study (Emerging Practices) from University at Buffalo where he taught courses in social media, civic media and new media design.